The Sin Of Envy

Folks I am just as green as a piece a Christmas bender whiskey chit! Jack’s upgraded his armament with a brand new pocket pistol! Lookit - it’s a polymer gun so it can easily take the bumps and knocks of carry duty, it’s a Ruger and they build  all their guns like tanks, it’s striker fired just like a full blown fighting gun... so he did alright. Some of the self proclaimed gun experts out there will snort in disgust and derision at the .380. They put on airs of superiority and start flapping off about calibres like they’re some kind of status symbol - because everyone knows bigger is better, right? Can’t remember who it was, but one of those fags was fond of referring to the 9mm as the “Europellet”. As a kid out hunting, I’ve shot more “soft targets” than most Navy Seals. I know what bullets do to meat, and at close range the 9mm and the .380’s - properly stoked and properly applied - WILL ruin your day if you’re on the wrong end of them. 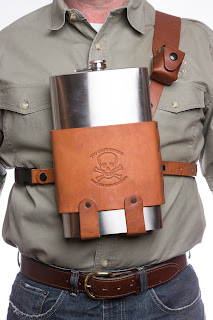 This is my current concealed carry set up!
HAR HAR HAR!!!


If I were required to carry though... I am not sure I would approach the subject the way Jack did. I'm not saying he's wrong and I'm right because there's more than one way to skin this particular cat. Yes, those little guns are viable defense tools but they have some limitations. They are rude little guns to shoot with high end loads, and accurately shooting small guns beyond social interaction distances is incredibly difficult. And for me... letting bad people that far into my personal space does not sit well with me. For my tastes, if I were to carry a gun with the idea of having to fight with it... I'd carry a full size fighting gun. I just shoot better with them. At 25m I will keep most of my shots inside a group the size of your head (with my higher end guns). At 50m I can keep them all on your chest. At 100m - if I can take my time and squeeze off my shot, I can hit the metallic pig silhouette four times out of five at the range, if that means anything. Mind you, if you throw stress and adrenaline in - all that accuracy goes out the window... so whadda I know? I just feel better with a larger gun with a mid-range chambering. I shoot the calibre of God and St. Cooper and have never been disappointed with it. I have other guns in other calibers... but for me, the ultimate blend of firepower and controllability is the 45ACP. Your mileage will vary. 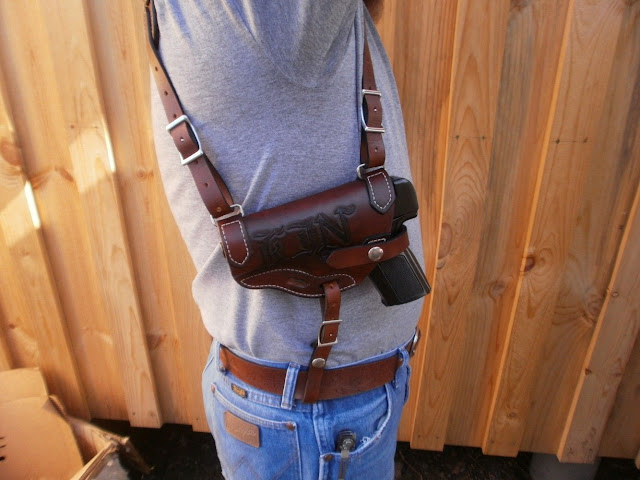 The trade off with big guns is that they are harder to carry and conceal. I am a man that likes to carry a lot of junk around with him... but I am glad I don't have to pack a full size gun. Although... I've never really used a shoulder holster. This one looks pretty comfy, and would look great were it not for the tooling on the leather...

I think I'd like the gun in a horizontal orientation too. It just looks like it would be a little faster. If I were to carry openly I like the idea of some of those chest rigs ya see the guys wearing. Didn't the American paras use those back in WW2? I've seen some of the fly fishermen in Alaska carrying big assed revolvers in them and it looks like a good way to go too. 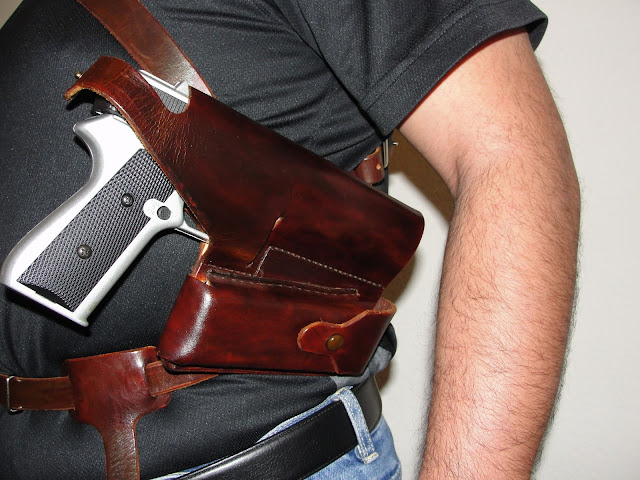 This one is home made. It doesn't look as comfy to me as that one above.
I would like something that would allow me to move. 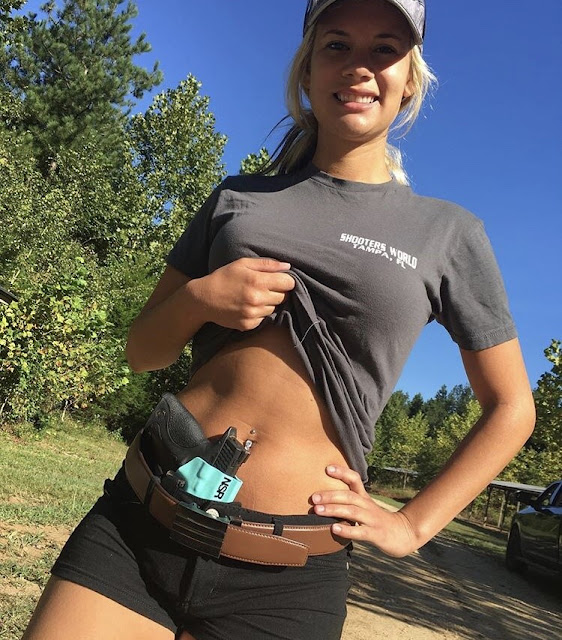 One of the gun gurus on OyTube carries his gun just like
this young hottie.
(She wears it much better than he does, HAR HAR HAR!!!)

I dunno what to think about that. The guy on OyTube who teaches courses on self defense with guns carries the same way this chick does. Like her, he has a flat washboard stomach, he's a former special ops guy, and he carries a Glock 19. When he throws on a tee shirt you can't tell that he's carrying. I'm 55, I got a gut, and if I had to reach around it to get my gun I'd probably blow my balls off. (And before one a you retards says it - yeah, I know, I know... the wife'd never miss it! HAR HAR HAR!). That has to be uncomfortable doesn't it? All I know is I'd hate to have to run around, bend and jump  and maneuver with a gun at my crotch.

In my 40 years in the shooting sports I have learned one thing for sure - and that is that we tend to get hung up on guns and gear and equipment. It's the same for the rod and reel guys too. In a fire fight, the key issue in deciding it will be tactics and skills. Every time the gurus talk they always seem to say the same thing: your hands and gun have to be able to move on their own while you concentrate on the threat. Getting there means training and maintaining skills to develop the muscle memory. Fortunately for you Yanks - that 2nd Amendment of yours is a glorious thing. Be worthy of it, and get proper training.

What, and how are YOU carrying?
Posted by Glen Filthie at 06:32