Tired: A Rare Retraction And Apology

When I was a kid, it was easy. Books and comic books. Hassling the friends. Riding out to the farmer's field to catch bugs in the grass and frogs in the pond.

Today, I wonder if the answer to stress relief isn't the same? Push away from the computer, turn off the screen - and go do something fun. I am bushed too. 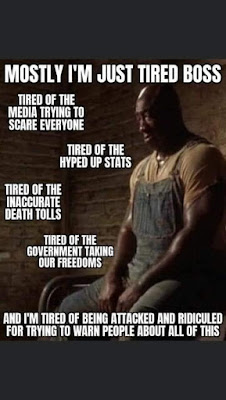 The fuggin Chinky Pox has us at each others throats. People are seriously losing their chit. I heard on Blab that the Mayor of NYC set up a tattle-line and web site where you could rat out people that weren't scared enough of the pox and breaking quarantine - and it filled up with dick-pics and middle fingers and rude jokes from angry retards, HAR HAR HAR!!! Why was I not informed? I'd like to send him a pic too!!! I should put a great big rude pic of my junk up on this blog in support... but that really WOULD make people sick, HAR HAR HAR!!!

I'm feeling bad, all of a sudden, for picking on Aesop. I didn't realize that others were piling on him too, and getting fed up with his snark and chit. I know what it's like to be the lone contrarian. Being raised by families of shitlibs and progs, I had all the wrong opinions about queers, about snivel servants, public school teachers, about guns, rights and liberties ... you name it. And yannow what? The worst beatings I took from them - the absolutely most hurtful and painful ones - were the arguments where I was clearly right and they were wrong. When that happened, they lost their fuggin chit and emotionally beat me to a bloody green pulp. Being right and winning a debate or argument with them wasn't worth it. Eventually we got so dug in on our positions that it broke us apart. Maybe the Chinky Pox is like that, and no compromise is possible. I am beginning to think so.

I don't think Aesop is right, but he DOES have a right to his own opinion. Scientifically and academically speaking - he may yet prove right. The Chinky Pox ball is still in play... but for me, it's all over but the cryin'. The fat lady has sung. I'm sorry for jerking your chain, Aesop, and I'm sorry that we ain't gonna agree. I do reserve the right to make rude jokes at your expense, though, and heartily encourage you and everyone else to reciprocate if possible.

Today, I am rolling out Big Red from his ice tomb and I'm going to go for a little burn. First one a the year!!! Woo hoo!!!  I am done with the fear, the quarantines, the lockdowns and silliness. If those are still a thing for you, fill your boots. As for me... it's time to get back to work and start looking ahead.

Stay safe you guys - and don't get too worked up about this. If you are going to quarantine and lock down I will respect your decision and your space. But - you are going to have to respect my rights and freedoms too.