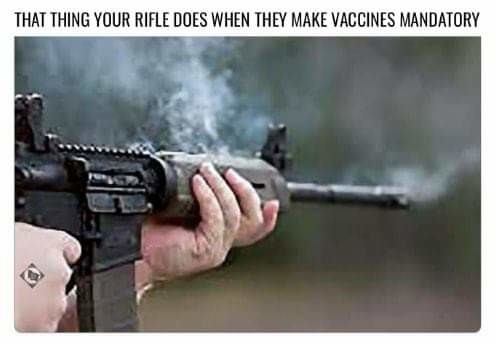 But... does the flip side of that apply? Can two rights (in every sense of the word)... make a wrong? I need to get the weasel words out of the way up front: I agree with Jess 100%.

CNN should be shut down NOW. The New York Times and every other leftist rag sheet publisher should be shut down NOW. They’re flat out lying to the people, about the people,and endangering the public with their BS. Any gun owner knows firsthand how those journalist pricks will pull an “opinion” out of their ass and present it as fact. There IS a point where freedom ends and responsibility begins.

As soon as I saw the numbers on The Chinkypox I knew it was a hoax or an hysterical over-reaction. I personally will not abide the lockdowns and social distancing bullchit if it runs counter to my interests or those of the people I interact with. A lot of folks were scared silly so I kept my distance to set them at ease or avoid them. Who needs to start something over a mere flu? But there is a point where I would; if we were faced with a real pandemic I’d lock down and ride it out. There’s a point where restricting freedom makes sense. If you are looking at a 10~30% fatality rate... it’s a no-brainer. Likewise for vaccines... FFS, get your damned kid vaccinated. The math and science on that is a no brainer too. Getting your child vaccinated protects them and the community they live in. At what point do individual freedoms compromise public safety? We really need to have a discussion on that. I think I saw some smirking cunned stunt in the nooz that locked her whole state down without a second thought. Was it Michigan? That’s a flat out abuse of authority and she should pay for it personally.

I think there’s something else going on here too. When I was a kid, the media went after the church with a baseball bat. Every week, there were stories about fag priests attacking the choirboys, or some fraudster bilking the rubes that followed him, or otherwise betraying their faith and people for personal profits. The church took a shellacking ... and they damned well deserved it. The big denominations are still riddled with perverts and corruption and the perps are being covered by the leadership. Most people no longer trust the big churches, nor should they.

The same thing has now happened with science and tech. Fat Al Gore made a fortune by selling environmental nightmares to a gullible public while he lived in mansions that left carbon footprints the size of a small town. Up here in Canada, that greasy nine iron, David Suzuki went across the nation back and forth, scaring the kids out of their lunch money with tales of drowning polar bears. During the Chinkypox the scientists were preaching the end times, and morons that should know better are eating it up. Scientists are supposed to be objective and dispassionate; but now they have started to “peer review” themselves to censor perceived heretics. Just as the church didn’t police itself, nor are the scientists today. They’ve allowed the loons and carpet baggers take over. In better times we stretched the necks of people that betrayed us like that.

We really need new leaders. Or maybe new countries? The ones we have see us as marks, and we need leaders that look out for us rather than prey on us.