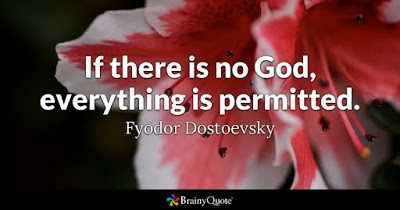 I arrived at this exact same sentiment, completely independently as I watched our neoliberal families disintegrate. With the in-laws, it started for them when the youngest son passed away in their family. My mother in law thought that no God in his right mind had any business taking her son... and threw out her faith wholesale. Curiously, with the exception of myself, nobody is religious and they bought into the permissiveness and tolerance of neoliberalism too. It became their new religion, I guess. Divorce, infedelity, sexual degeneracy, double standards, cheating... it's all on the table with that lot except of course, when they are on the receiving end or have to pay the social consequences themselves. "Do unto others, and then split!" is the new golden rule.

Now I am watching the neoliberals and they are swinging dangerously authoritarian. You have to be an environmentalist or you're an ignorant climate denier. You have to wear a mask out in public or you are trying to kill grandma with your germs. It's not good enough to tolerate queers and degenerates, you have to embrace and celebrate them as your new leaders. Lord help you if you say something wrong on one of the social media sewers. I think all this ramped up authoritarianism coming from the political left is an effort to somehow re-establish some kind of order. The lunatics are in charge of the asylum, and the drunks are in charge of the liquor store over there. If I am correct, and these cretins keep doing what they're doing... they are eventually going to kill thousands, if not millions. It's how they roll. They've done it before in history and they are ginning themselves up to do it again.

My question is this - is it more important to survive them, or to fight them?
Posted by Glen Filthie at 07:52