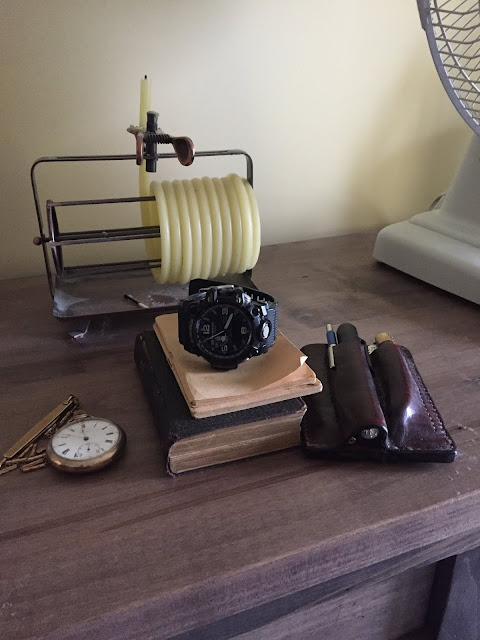 That's all I have left of Grandad. The pocket watch, knife and fob,
the bible, and two "two-penny bloods" ... pocket sized
murder mysteries published
in the early 1920's.
The other junk is mine...

I've always been the oddball in my family. But we scraped by. My mother hated me because I remind her of her father and because I hold all the wrong opinions and thought she was an idiot - much like her father did, so I guess that's fair. My daughter hates me the same way, but it's not an issue anymore. My family are not champagne socialists - but they're very, very close. Same for my wife's family. They get their opinions and views from the mainstream media, day time TV and women's gossip shows, and became radical leftist progressives in the course of the last decade.  As that happened, I became a fascist (literally worse than Hitler), a racist (all I need is a cone head and a bed sheet), a homophobe (that one might be fair) - and all the other leftist bogeymen rolled up into one.  We parted ways, them going on to their progressive Utopia, and me staying behind, clinging to my guns n' bible, HAR HAR HAR!!! 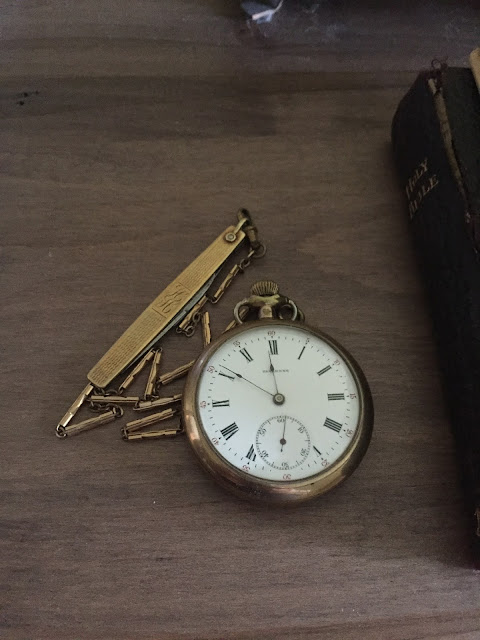 That's a Tavannes pocket watch. It's a plain Jane beater,
you can buy them off Fleabay for about $150.00.
It was Grampa's 'working' watch.
The knife is a gold Boker  with his initials engraved on it,
and the chain is gold too.

There was a website for tracking down info on these watches and I looked into it a couple years back. If I remember correctly, the watch was made somewhere between 1920 or 1930, and was a businesslike workman's watch. If ya broke it, you either fixed it or threw it away and didn't think twice about it. Gramma gave it to me after having it repaired for a pittance - the jeweler replaced the mainspring and it ran... like a swiss watch, I suppose, HAR HAR HAR! Back then the Swiss still made fairly good time pieces that the working man could afford. When completely wound, it will run for 2 or 3 days. It keeps good time. Grampa also had a fancy gold watch that disappeared after his death and I probably don't want to know where it went.

All this stuff is junk that Grampa probably would have thrown away, had he not died first. Being turds of a feather, we actually got along fairly well, to Mom's chagrin. At one time this stuff was more precious to me than gold. But over the last couple years, and the changes in my family and myself... it has just become so much meaningless stuff. When I got it I had visions of passing it on to a grandson along with some of my own junk... but it will never come to be. My branch of the family line ends with me and to be honest... I am glad of it. I wonder how many men find themselves in this situation, what with divorces and family breakdown being what it is?

I used to grieve pretty hard over the loss of my family, and even more for the one that might have been... but as I get ever older and more distant from them, I find myself wanting ever more distance between us. I can't help it. The other day I found all this crap while rooting around in my junk drawer... and it just evoked a feeling of forlorn emptiness. Instantly I thought about boxing it all up, dropping it off on Mom's doorstep and leaving the old bitch do something useful with it. I have no one to give it too. 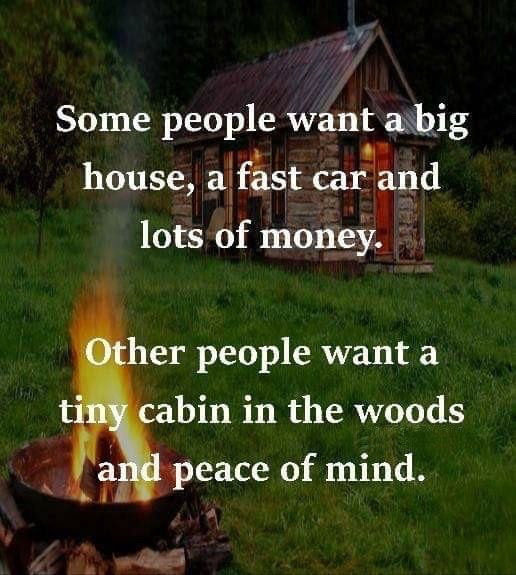 I will take number two, if it's all the same...

I am just stuck. I'd like to see it stay in Grampa's family... and if it stays with me, it'll just end up in the garbage or sold to a junk shop for a pittance. But giving it back to Mom would stir up even more angst and drama with that rancid old bint... so who knows what'll happen to it.

I will worry about it another day I suppose.
Posted by Glen Filthie at 09:08