It’s becoming increasingly clear that something is drastically wrong, and something is going to have to be done about the mass media... 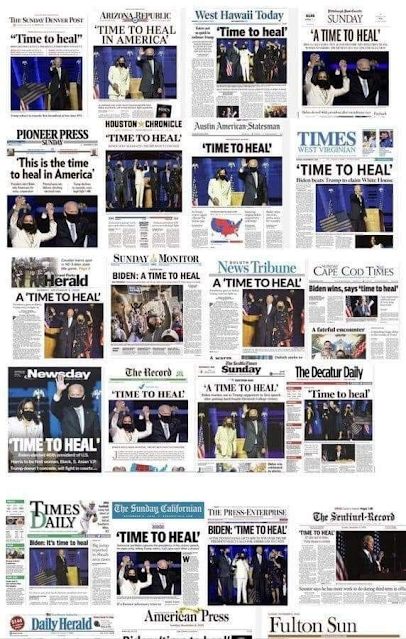 This is the liberal idea of free speech.
These guys abort children right up until moments before birth.
They sell fetal body parts.
They attack families with feminism, advocate sexual
lunacy, racism, and cultural fascism.
They burn, loot, and assault innocents.
You can’t trust them any farther than you can throw them.
They won’t heal anyone and I won’t ally with them.
Fact is I won’t tolerate them anymore either.
I wouldn’t start a campfire or wrap my chips in these rags.

I am old enough to remember a time when the weekends were a big deal for the papers - at least around here. I haven’t read one in over a decade... but the Aaaaaadmontin Urinal (Edmonton Journal) used to have a massive Saturday edition. I helped Big Bro deliver them and the friggin things weighed a ton. When’s the last time you saw kids delivering newspapers? The Saturday edition had all the flyers with the big sales notices. There was a weekend magazine and a massive edition of comics.  The Sunday edition was usually mercifully light, and had an insert that discussed human interest stories and spiritual life.

My elderly father recently bragged about reading The Urinal cover to cover. It’s a worthless leftist rag sheet now like all the leftist mass media outlets, but Pop still pays a subscription to read it on his iPad. He’s so old and disconnected that he thinks he’s being informed. To even suggest he’s reading worthless propaganda would hurt and insult him. His wife will set her watch and warrant to the shit she reads in it. They think I am a horrible person for daring to doubt the media. (The fact that I like guns, Trump, hunting and fishing also make me persona non grata in their august company).

I wonder who will end up in the trash can of history first? Them? Or me?