This, Right Here, Is Why Japan Got Nuked 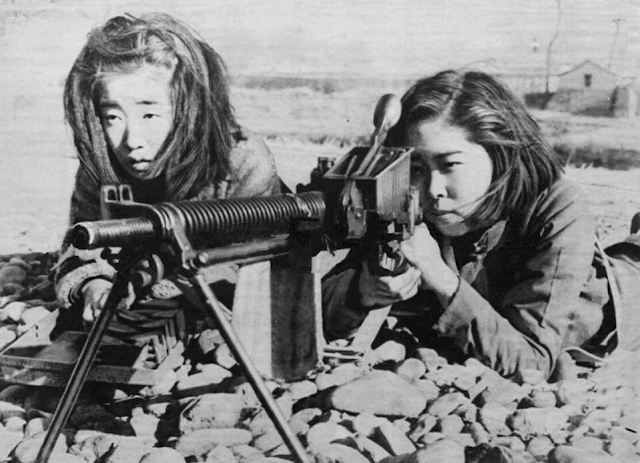 That's a couple schoolgirls practicing and getting ready to greet American squaddies on the home islands, in the closing days of the war in the Pacific. This was the Japan that Doug MacArthur and Harry Truman faced. Japan was pretty much a beaten, but still - incredibly dangerous foe. Iwo Jima and Guadalcanal would look like picnics compared to storming the home islands. And take it they must - people forget that the Japanese killed more people than the nazis did - and committed atrocities that made the SS and Gestapo look like choir boys. The ruling warrior class lived by the Bushido code that forbade surrender. For the Japanese at the time - they had two options: suicidal resistance... or slow starvation.

Today shitlib historical revisionists like to paint America as the heartless agressor that eagerly mass murdered thousands for fun and profit. I think that black baboon - Barkie Obutthole - even apologized and bowed down before them. If those idiots were smart enough to crack a history book, they'd learn that Truman could use the nukes and kill tens and maybe hundreds of thousands - and end Japanese fascism forever - or drag the war out, and watch starvation and invasion claim millions. In the end Truman didn't have a choice at all. It all came down to numbers and projected body counts. In their zeal to condemn America, shitlibs often forget that Japan could have ended the war at any time too... starting with Pearl Harbour.

I believe there are inflection points in history where people and nations change - and the Japanese came out of WW2 as much better people. I think America did too - for awhile. But if you aren't careful, America... you could very well be reduced to putting YOUR kids on the machine guns in the days ahead.

Have a care as you go... I hope the wisdom of men like Truman will still hold. But... judging by our baby boomers, Gen X and Millennials... it isn't looking good.