Dog Fight In The Reclusium!!! 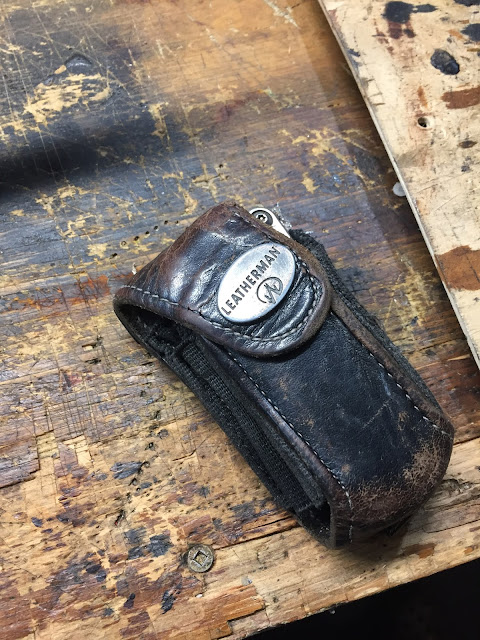 Any a you guys got one a these? I just love them because they are just so damned useful. Leatherman multitools are an old concept but I still stick with the original Leatherman. I think this one is close to twenty years old. I have had it forever. Before that I had one of the originals and I replaced it because I believed that the newer ones were better. It must have a million miles on it.

The gasser about the Leatherman is that they make a top notch EDC tool... and then put it in a crappy sheath! This one is falling apart and I have almost lost the tool a couple times because of it. My options are to buy another crappy one from Leatherman or Amazon... but that isn't the answer either. I am going to have to bite the bullet and make a pouch for it.

Although I am a chit house leather worker I have had nothing but grief with pouches of this type. I'd soak the leather, futz around with clamps and rubber bands and stuff to try and form it around the tool itself ... and each time I failed. This time I decided to do it right. I carved a half - assed form and bolted it down to a larger piece of wood and then glued it for good measure. I dragged out the big iron and went to war with this project. The leather is the thickest I have - they use it for saddle skirting. I soaked the ever lovin' chit out of it for an hour. 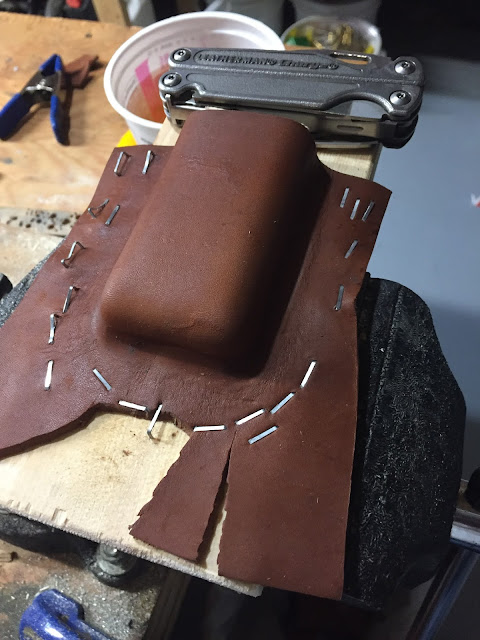 Then I took it down to the Reclusium, laid the leather over the form - and the dog fight began. I cursed and swore as I worked. It looks easy, but the second ya let your guard down and think ya got it beat, the leather relaxes. The thicker leather was murder, and this SOB wasn't gonna give me a win. I got so damned mad, I dragged out the worst of all my guns - the staple gun! Hah! Take THAT, you good for nothing sonofabitch!!! Would you like some more staples? Or would you like some more? How about some more!!! BITCH!!! Har - I didjya see where I cut on that mofo? I am temporarily victorious and can take a short break. I know darn well that when I go back downstairs, that fuggin leather will try to climb off the form... but I have other weapons I can use on it to make it behave - and I will!!! Wish me luck, folks. If I can't win this time - I will throw the Leatherman out in a fit of RAGE!!! 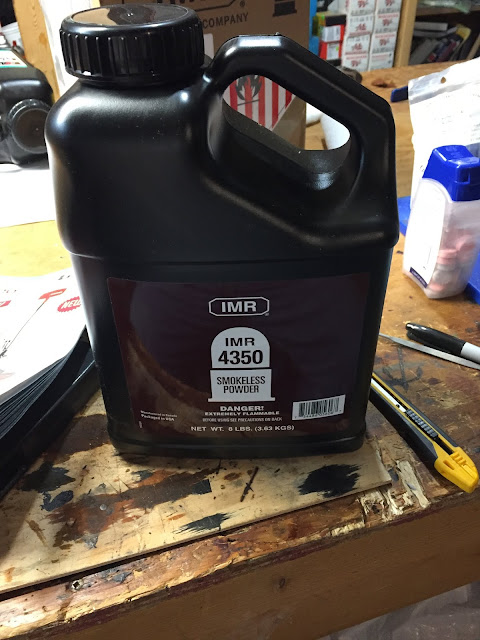 In other news my gun powder came in. It's an 8 pounder, roughly 1400 rounds worth. I am hoping that will take me into retirement and that the next time a resupply is needed, the gun will be with its new owner...whoever that happens to be. I had had dreams of passing this rifle to a grandson or a nephew but that is something that will never happen. Pity.
For now - Obsolete Man is victorious! I hope all you obsolescants, tards, and wastrels win as you go about your chores today too.
Take care!!!
Posted by Glen Filthie at 10:22