Give Us This Day Our Filthie Bread... 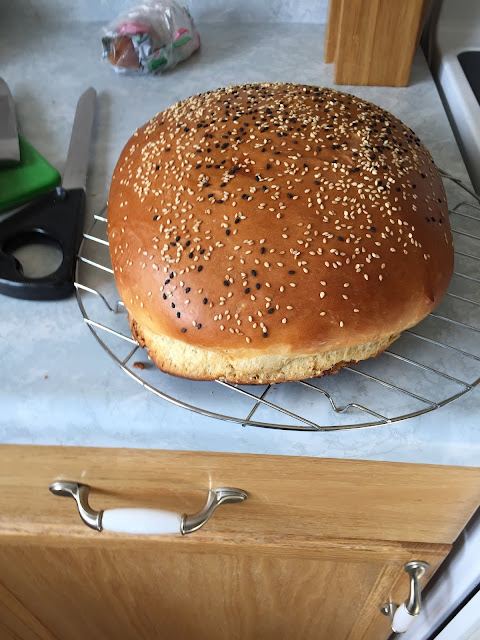 I should make a 40 lb. burg  patty and make a bun out of it.
Can you imagine trying to eat something like that?

So we tried it again. This recipe was slightly different... it has eggs and oil in it. The wife divided up the batter and made cinnamon buns with her half and mine got made into bread. We almost got into a domestic dispute because I wanted a pinch more salt this time. I won that battle and will prolly regret it. It looks okay though.. I think. I like the circular loafs. I want to eat that Roman bread I’ve seen on TV where they make a dip for it out of oil and balsamic vinegar. In the episode I saw, the characters were all sitting around eating it when the bad guys showed up... and the knives and swords came out and everything went to hell. The ancient Romans took their bread and their mayhem quite seriously, if Hollywood is to be believed.
After I got the kitchen cleaned I went out into the back yard and scooped dog poop. The snow melts, a few more land mines are exposed...and I get rid of them as soon as I can. Some are still ice locked and there’s nothing I can do until they thaw out.
It’s still early spring here, though. The ice is still on the ponds, and it still snows some days. But thankfully the bow range is ice and snow free now...mostly. 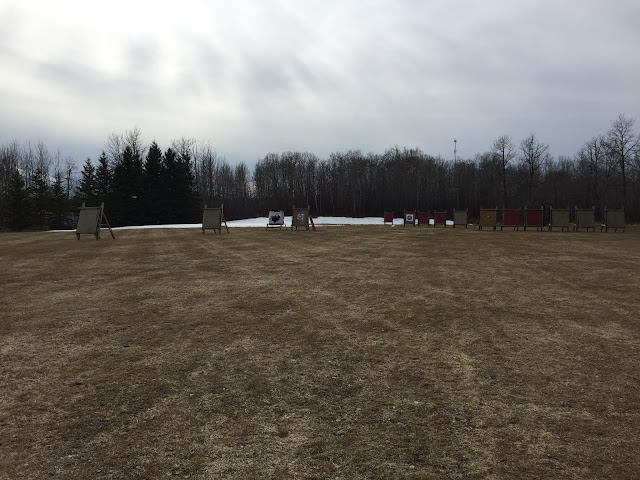 I just shot until my arm fell off. It was nice to shoot in my shirtsleeves. One of the zipperheads left the front gate open when he left, and a passing couple dropped in just as I was packing up. They asked me about club fees and events and I went through it with them. They both just looked tired as hell, so I gently poked and prodded and got their story. They got their first boot in the arse a few years back when wildfires burned down half of Ft. McMurray. They were insured but a thing like that is a life disruption to be sure.  Then the Athabasca river flooded and they got caught in that. Couple that with the oil bust, and then chinkypox... and the last couple years have been really hard on them. They’ve moved down to Edmonton seeking better opportunities and I wished them well with it. According to official stats our unemployment rate in Alberta is 9.75%. I can’t prove otherwise but I will bet it is double or maybe even triple that. But whadda I know? I am just deeply thankful my wife is still working, we have some savings and we’re not out on the street. It really is amazing right now, isn’t it? It used to be that our victims were the poor and needy. Now it’s billionaires like Orca Winfrey, the Royals, the oppressed sportzball noggers, and all the coloured human trash flooding in from the third world. It’s the brave chubby nurses and public school teachers who selflessly do their jobs despite the deadly pandemic (with a 99.7% survival rate). They deserve “hero” pay!!!
I wonder where that money will all come from? Not me - I am just a bum on the dole. Not my visitors at the archery club. Not any of the tards and turds at the rod and gun club either. I sure hope all this diversity starts paying dividends soon...🤢
It’s too much to think about I guess. Have yourselves a great Sunday, and remember to be thankful you aren’t a victim... real or fake, HAR HAR HAR!
Take care.
Posted by Glen Filthie at 23:28