The Art Of Manliness: Amputations 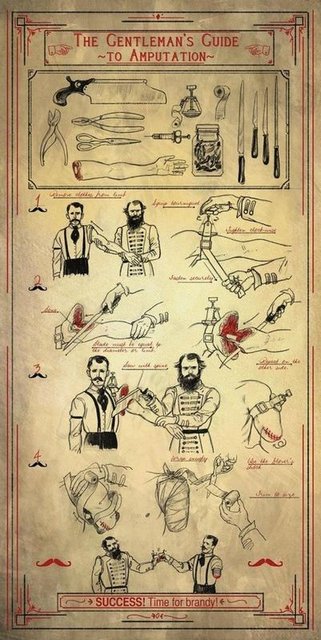 I can’t handle that website. I swear to gawd - some of those guys have to be poofs. And most a the rest are flimps, HAR HAR HAR!

As a lapsed black powder geek, I used to hang out with the weirdos and beardos on Claude’s old site... I don’t even know if it’s around anymore. The cannon guys were the most eccentric of the lot! They could raise your hair and make it stand on end as they gave lectures on culverns, demiculverns, falcons and all the other hell bores. And the shite they fired! “Grape” shot? Canister?!? Chains??? The injuries must have been hellish!!! In that period, in many places the battlefield surgeon was right up there with the barber...surgery was a ‘by guess and by golly’ proposition where if you survived to get off the battlefield with your injury... you probably wouldn’t survive the surgery. To do the job you would need a total lack of empathy and squeamishness.. and a very fast saw.