We Are All Royalists Now

He started out with such promise. As a tot, he almost killed the entire Royal Family with a cabbage fart. The were all at a family photo shoot in their finery when the Prince opened up and let them have it... and for a few seconds it looked like The Queen was going to have her grandson sent to the headsman in the Tower... it woulda been a justifiable homo-cide too! HAR HAR HAR!!!😆👍

After that the lad just took off. He went to a Halloween costume party dressed as a nazi with the swastikas and the works - and the faggotry clutched their pearls and passed out. As a young man he got impressed into the military and was ordered to stay behind when his unit shipped out to the sandbox. He was too valuable to risk and the Queen ordered him to stay at home - and rightfully so. But Harold wouldn’t stand for it and shipped out anyways... and rightfully so. When he came back from his first tour he referred to one of his squaddies as “his little pakie buddy” and the thought police shat themselves in outrage. He was ordered to stand down and muster out, but the Prince was his own man and went back for another tour of duty. The Queen was livid - and who could blame her? But this young man... he had the makings to be a better man than any of the Royals. Much like our Justin Trudeau - poor Harry had a moron for a father and a whore for a mother... but somehow he overcame it. I know you Americans aren’t big on Royals... but if anyone could change your mind on that... young Harold might.

Somewhere, something went off the rails. Badly. He was finished when he latched on to that floozy he’s with now... and something inside him died. He sold his hunting rifles. His shrew led him around like a neutered poodle. That half noggered shrew was race whoring with Orca Winfrey to complain about how she was oppressed... and Harold went along with it.

It’s weird. I have seen any number of good men ruined by low women and I just don’t get it. I would have thunk Harry was made of better stuff than that. 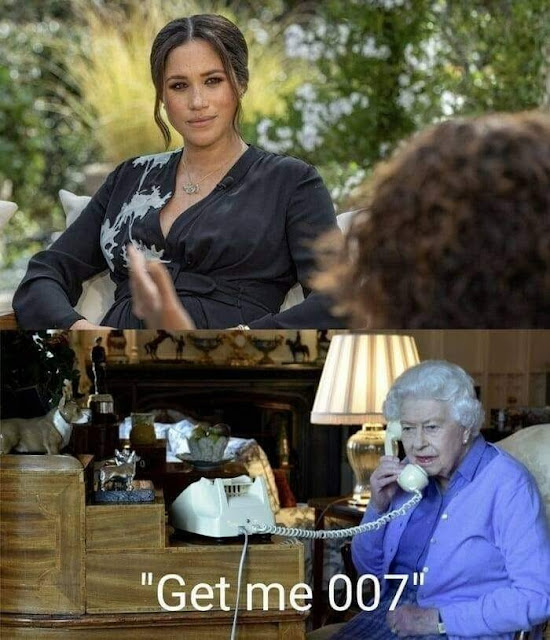 I'm sorry Your Majesty - but 007 has turned into an neurotic emo
because of his shitty black she-bitch boss!
HAR HAR HAR!
The old adage holds: "Burn the coal, pay the toll!"
HAR HAR HAR!!!
Clown world can be entertaining - IF your sense of humour holds.
Posted by Glen Filthie at 06:45