The other day I fired up Big Red and went out to the range with just the Ruger Redhawk - in the Holiest of calibres: 45 Long Colt! It is one of their new fangled ones that will also do 45 ACP with moon clips. I usually just shoot 45 LC in it. Whatever - the trip was more about the ride than the shooting. My range is out in the country down a gravel road which is a challenging ride on a 900lb. battle cruiser. My riding skills were adequate but my pistolcraft sucked. Or maybe it blew? And gave 5 cents change for a wooden nickel? I stunk the place out with my marksmanship. In my defence, the kid next to me on the range was shooting one of those commie Tokorev pistols. What are they chambered in? It’s a bottleneck cartridge, whatever it is... and the damn thing barked when it went off! It rattled my fillings!

But there were other distractions too: it was beautiful out. The snow’s all gone, the buds are unfurling into leaves and the trees are tinged with green. It wasn’t overly chilly, I was good with the leathers and heavy sweaters underneath. The bike needs an oil change and I will get on that this week. I heard one pinhead on OyTube saying he mixed 10W40 with 20W50 for his bike oil. I’ve always heard that you never mix oil viscosities like that but whadda I know? The chinks put peanut oil in their engines... and maybe that explains why their motors only run for an hour before they pack it in, HAR HAR HAR!😂👍

I guess Mom is talking to me again. She sent me a text last week, we went over and had a civilized conversation and a good visit. My mom is a shitlib harpy; she gets her politics and opinions from day time TV shows like Orca Winfrey, The View, Ellen The Degenerate etc. About a year and a half ago she insisted on a political discussion and I got so pissed off with the bitch I just got up and walked away. You simply can’t have a decent discussion with her because she is so damned stupid. All these woke liberals are! “Is homosexuality actually a beautiful alternative lifestyle? Is pedophilia? Are men really men, and are women stuck being women? What bathrooms should they use? We should shut down our nations, cripple our economies and give our kids neurosis about the common flu, and then get digital passports and swastika arm bands to prove we got vaccinated!!!” What kind of conversation is that?

Should I put peanut oil in my motorcycle’s crankcase? GAH.

Mom and I parted ways after a particularly nasty conversation like that. I had the wrong opinions, I was a nazi, literally worse than Hitler. It used to really break me up about parting ways with family members that got “woke” but now? Shitlib women aren’t worth it. My grip on sanity is tenuous and slipping. I don’t need some shrieking harpy stomping on my fingers as I try to hang on and keep from going over the edge. There’s good things to talk about if you look for them. I told mom I knew where she got her politics, I disagreed with them, my reasons for doing so were valid... and she could shove hers up her ass, because I was done with the discussion. That was a year and a half ago. I know old people will say mean, thoughtless things... but liberals do it as a matter of habit. Who needs it?

Last weekend we had a nice visit. No politics, no apologies. No talk about the horrible plight of sexually disturbed degenerates, the joys of Marxism, or the evils of private gun ownership or the perfidious Donald Trump, or my allegiance to der Furher and the third reich. I was accepted and approved of by their new dawg. It was nice to be a family again. Mom is still pissed at me, but she’ll get over it or not. I am good either way. She is pushing 80, I am pushing 60, and time is way to short for this shite.

Should I put Aeroshell 20W50 in Big Red’s crankcase?

I hope you have a great Saturday day, and a good day with Mom tomorrow. 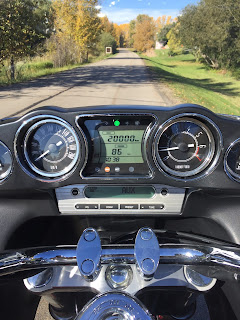