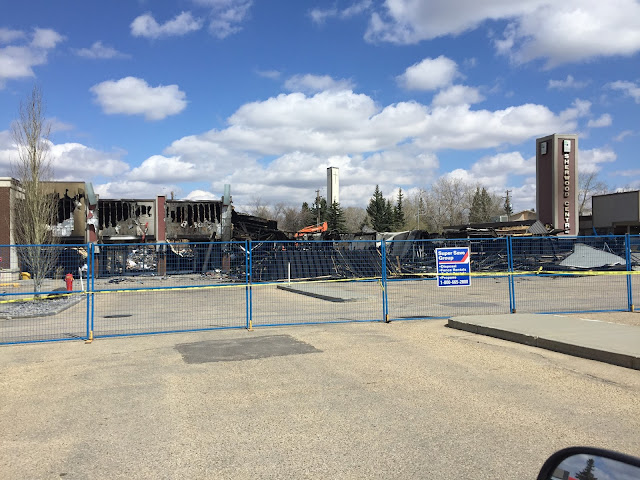 This little community strip mall is probably the same age I am. When I was little, it was the heart of our small town a few miles east of Aaaaaaadminton. In those days in my town, if you had a small business, you had fixed costs like your minor hockey and baseball teams. You paid for the team jerseys with your logo, and then whatever they could bilk you for after that! The big guns had a ball AND hockey team. In those days there was a Hull, an Orr, a Mahovolich or a Rocket on every street!

Amidst the char and cinders and ash are the remains of a KFC franchise. It was nothing special, the same as every other on you see in any small town. This one had been here for at least 56 years. The shops on both sides changed ownership dozens of times over the years. Maybe the owners of the KFC place changed too. I dunno... but it was always there. My brother was the family athlete and played for The Bucket baseball team when we were kids.

Now our small town sprawls like a big city. It took on a different feel decades ago. Most of the people of that era are gone. Somehow that little tiny take out KFC remained.

Nothing lasts forever I suppose. It’s funny, the things that last, though.