Isn't an arborist a guy who takes care of trees? Why yes, Google and Wiki tell me it is; and they are always right about everything!
100 years ago, Flapz and I were breaking camp after a successful hunt. He had arrowed a nice little buck, and we were mightily pleased with ourselves. I had gotten skunked - but Flapz' euphoria was contagious, and it's one of the things I love about him - he's always happy. On our way out he spied some small, scrubby little evergreens clinging precariously to a rocky streambank. They were about two feet tall, barely hanging on in an inch of soil. You could pick them like weeds or dandelions on your lawn - and he decided to grab a few. I said 'what the hell?' and took one too.
All Flapz' trees died because he neglected them. But my wife took ours, and tended it and watered it. She bought these weird 'fertilizer spikes'. They are spike shaped, compressed fertilizers that you pound into the ground like a tent peg - and they dissolve and release nutrients to the growing tree. Ours took to the TLC and grew like a weed. 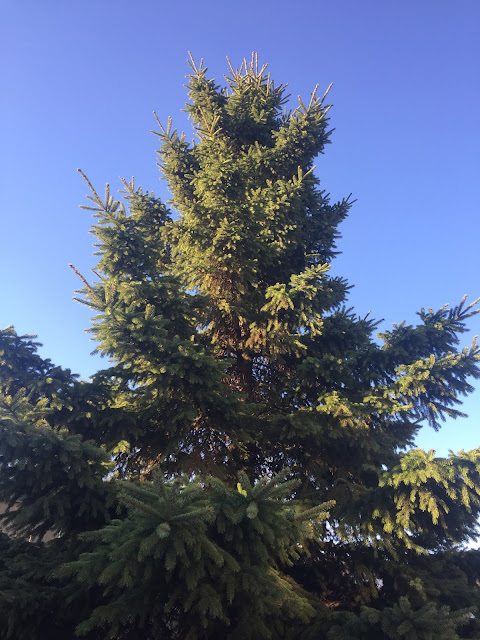 She's about 15 feet tall now, and right at home in the back yard. It leaves me wishing I had planted more. And the more I thunk about that - the more I thought - why not plant another one? 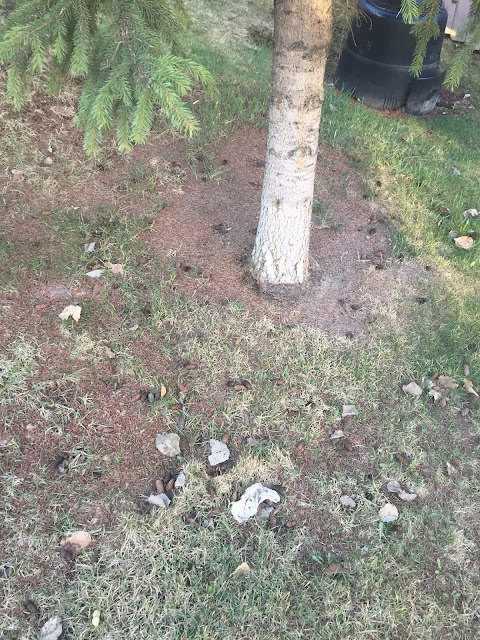 There's all kinds of cones at the base of the tree, mixed in with the cat and rabbit turd. I’m gonna gather them all up and plant them and see that grows. I won’t live to see them mature, but it will be a point of pride for me to shuffle of this mortal coil, leaving these green sentinels to mark my passing. 😊👍
I got the idea this morning. I went out for a long walk without the dogs; they are geriatrics now and just can’t do the miles any more. I went out alone and stopped way out in the parks to watch the sun rise and enjoy a cheap cigar. For a glorious half hour I was king of the world. I needed it, keeping my chin up is a struggle these days, and unemployment/premature retirement has its ups and downs. Getting used to it is hard work sometimes.
Part of that work is lugging around a metric ton of emotional baggage. I grew up in a family of hard left neoliberals - and you can imagine what that family life is like. Those people run their mouths, throw out morals and ethics wholesale... and then wonder why their families fall apart. And of course, it’s never their fault. I’ll be damned, but throwing that baggage away is ten times harder than lugging it around. We dropped by the folks on the weekend with a card and some flowers for Mother’s Day. Mom took her usual cheap shot but carefully veiled it. That was the cue to say goodbye and leave. Pop was happy at least, and so maybe I should be too. I have accepted the fact that mom was born a rancid bitch, she spent her life being one, and she’ll die being one too. It still hurts a bit... but whaddaya gonna do? It is what it is, and if I don’t dump this baggage between us I will end up just like her - pissed at the world with too many axes to grind. Dumping the baggage is worth the work. We left and went for a spring walk out in the country with the dogs. It is what it is.
Today I am going over to Big Al’s to drop the oil on Big Red - my murdercycle. It pishes me off: I bought a collection pan to catch the used motor oil ... but it’s about 1/8” too tall to slide under the bike! Goddammit! I don’t want to buy another one of those greasy grimey things... so it has become an excuse to visit and torment Al. Like me, he is unemployed/prematurely retired and sitting on the smoking wreckage of family baggage. Compared to him I got off light - he got divorced when his family fell apart. He’s a good chit too. It is what it is!😂👍
Welp, thanks for stopping in! I have a busy day ahead, and if the bike doesn’t fall over on top of me - I will be back with some rude jokes or more retarded commentary tomorrow.
Have yourselves a great humpday.
Posted by Glen Filthie at 07:26