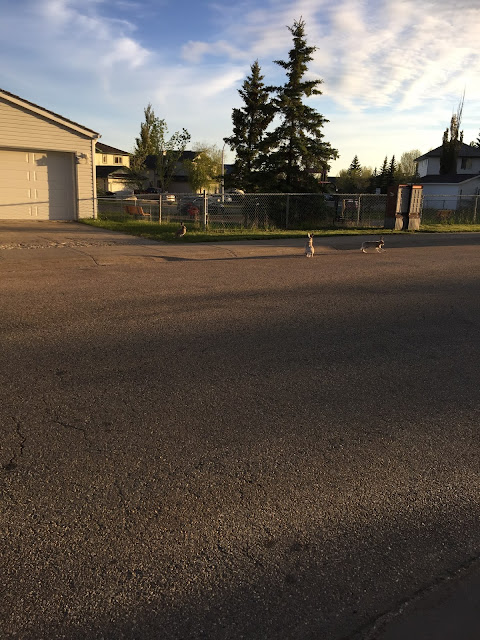 Gosh there’s a lot of rabbits out this year. It must be mating season because these ones let me and Mort get within 20 yards. These are the big lanky snowshoe hares. It really is amazing how the wildlife is adapting to the sprawling city. We have seen coyotes and deer come well the urban zones and last year we had a moose cow and her calf in that exact playground behind these rabbits. I’ve had them all within bow shot range several times.

I am just hopping mad at King Peter. His little hobby acreage is right beside a lunatic woman that is even a bigger shitlib than he is. She has seen the preppers, offgridders, and self sufficiency rural types and figured to emulate them. She has turkeys, pigs, geese, chickens and all the other animals over there... and they’re always getting out. Pete’s prize winning Schutzenhunde German Shepherds go nuts when these critters stray onto their land. The dogs are turd eaters and when they find ‘turkey paté’, they eat it and get sick from the parasites in it. It’s a weekly occurrence because the woman can’t build a fence or a coop to save her life. She has any number of abandoned gardening projects, half completed out buildings, and botched projects going on. In short, she’s a flake that shouldn’t be out there. I have been licking my chops and rubbing my palms together, savouring the idea of a shot at one of the stray turkeys that wander by our improvised archery range on a regular basis.

Yesterday Pete spied an escapee up by the house - and set a bloody dog on it! I put my head in my hands as the big beautiful bird saw the dawg bearing down on him. “Gobble gobble?” he asked. Then the dawg was on him, tearing him apart, and it was a few frantic “GOBBLE! GOBBLE! GOBBLE!” calls... and it was all over. The dawg left the mangled bird when Peter called it away. Queen Mary bagged him up and threw him in the trash before I could even complain about it! I suppose it’s my own fault - I am always bragging about how I will shoot the trespassing pigs and turkeys but I never do even when I have the shot. Peter had just had enough, I guess. After years of helping the air head next door getting her strays back, enough was enough. It’s a bloody shame, that bird would have made a fine supper, properly stalked, shot, and prepared. Instead he’s a bloody mangle in a garbage can.

Oh well. There’s more where that bird came from, and if I ever get another shot... I suppose I’d better take it, HAR HAR HAR!