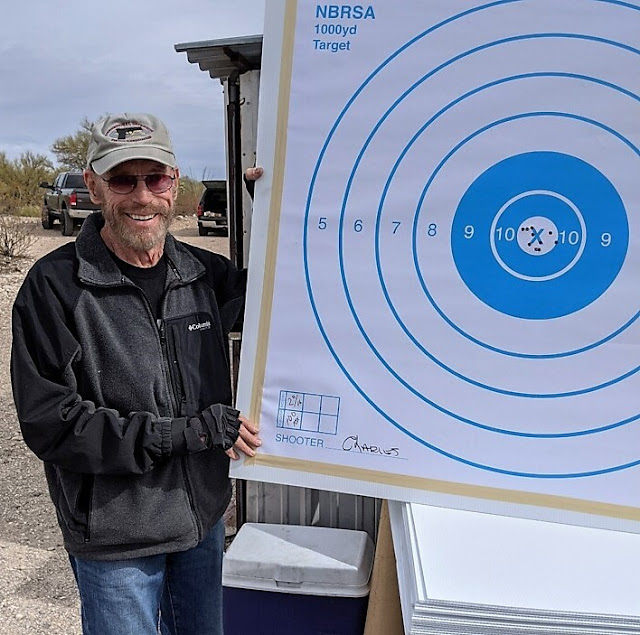 Holy chit!!! That's 10 of 'em that would fit
right between yer eyes!!!
DETAILS:
Congratulations to long range shooter Charles Greer! Charles set two new World Records in NBRSA 1,000 Yard Heavy Gun!1) Single Target Score:A perfect 10-shot 100-10X, eclipsing the longstanding 100-6x record set by Bill Schrader in 2005.2) Single Target Group:2.6566” 10-shot group size, beating the previous record of 3.650” set in 2019 by Tim Height.Charles set the new World Records shooting a 300 WSM cartridge with Berger 30 caliber 220 Grain Long Range Hybrid Target Bullets. His custom rifle is built on a Borden action, with Krieger Barrel, McMillan Fiberglass Stock and Vortex Optic. Charles set four other NBRSA World Records in 2008 and 2010, of which two are still standing, where he fired Berger 30 Cal 210 Grain VLD Target projectiles.
Hmmmm. Yannow I have never personally had any use for the short magnums - or any magnum calibres for that matter. For critters at reasonable ranges the standard calibres do just fine. I get close and put them down with one. But that is just hunting.... this long range stuff is a different can of worms! I am shocked at seeing a short magnum going into an application like this. And I develop a case of Tourette's when it comes to Berger bullets. Only the cool kids can make those fuggin things shoot! I can't get a decent group out of them in ANY of my rifles!  The gun gods piss upon me!!!
Fortunately I no longer have to face that wrath, today I shoot manly cast lead bullets (made by Yours Truly) in my own lead pot! And I do all that with the fragrance of black powder too! 😆👍
Congratulations, sir! Well shot!
Posted by Glen Filthie at 06:21