Welp, the experimental paper pistol cartridge results are in. Results and impressions are mixed. Let us start at the beginning. 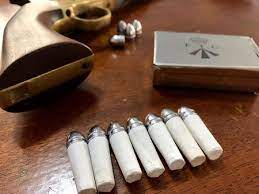 This is what properly formed paper cartridges of
day would have looked like.

Paper pistol cartridges were invented back in the 1860’s to speed up the loading process on the percussion cap and ball pistols of the day. Loading from loose components, the procedure is to fill the chamber with black powder, seat a wad or card over the powder, then ram a lead ball into the chamber, and then cover that with lube. Once all that is done, the nipples are capped and the gun is ready to fire. Five operations to load each of six chambers. I find the process relaxing but many find it to be a pain. The paper cartridge eliminates three of those operations.

There’s fancy kits you can buy to make these but I chose to make my own. And rather than futz with period correct conical bullets, I use lead round ball. It’s interesting to note that few people shot these guns for entertainment back in the day. With black powder, they are filthy, the lubes are gummy and sticky, loading and cleaning them was a drear, and it would have been prohibitively expensive for most. These things were strictly for business in their day. 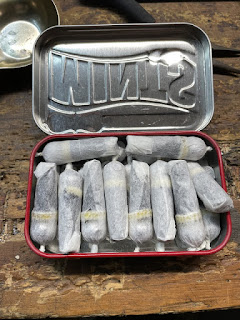 This is what my paper cartridges looked like.
These mint tins that I found in my plunder are perfect, they
will hold 20 rounds each.
.44 round lead ball, 30 grains FFFg Goex black powder.
For today’s black powder stubfart, the paper cartridge may or may not be the way to go. Instead of futzing with loose components at the range, you futz with them at home to make the cartridges. There’s still a lot of piddling about either way. I had a ball learning to make them in my cool basement Reclusium rather than baking under the sun at the range and loading from components at the bench. For me it’s a wash. I enjoy the slow cadence of the loading process, and I like fiddling around in the Reclusium Subterraneum too. I think I am going to keep at it.
Don’t let the following photos scare you. I had a good and bad day at the range. When I got there this little chinaman was in a fury because his .500 S&W wasn’t hitting chit and he was convinced it was defective. He saw me smacking the gongs around and brought it over and insisted that I shoot the cannon and scope it out. Those things generate stupid recoil and muzzle blast but I was able to coax a 4” group out of it offhand, and the chink was delighted. He gave me five more rounds and had me go after the gongs - and crowed in delight when they almost got blown off their hangers. Then he gave me another five but I tried to refuse, and he wouldn’t have it. I beat up the gongs again and was done in…but he insisted, and I went around again but started to miss. It takes a lot of concentration to shoot the big boomers, and I flat out refused to shoot for him after that. He was delighted that his gun was fine, and all that was needed was more practice. Guys - I gotta say this: if you are buying your first handgun… it’s a 22. Period. No bones about it. Learn the fundamentals and basics. After that, get a 9mm/45ACP/357/whatever…and those will look after everything from tin cans to noggers and hobgoblins. Leave the cannons for the asians. They will turn you into a flinching idiot if you are a beginner, and make average shooters like me wear out!
So, with the lame excuses out of the way: 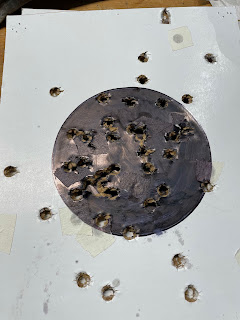 Nice shotgun pattern Filthie! HAR HAR HAR!
😝
28 out of 40 in the black, 25 yards, offhand.
GAH!
I will guarantee that all the misses are pilot error,
and NOT the fault of the gun or the load.
Normally I’d pick up another 4 or 5 hits at least.
Complicating things is that - like all percussion pistols from the black powder era, the sights are notoriously high, about a foot at 25 yards. When target shooting, I put up two - I aim at the bottom one and the bullets hit the upper target.
I had one dud in the batch of 40 that I made. It took three caps to fire it, and I think I’ll chock that up to pilot error too. All the rest fired like champs. 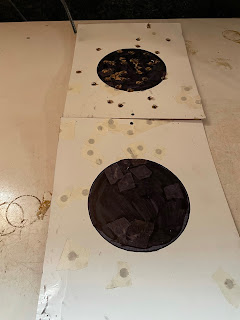 Clean up wasn’t a problem at all. Burnt paper is left behind after the shot but doesn’t seem to affect accuracy at all in practical terms. Just reach into the chambers with a pick or screw driver and fish the crud out when you clean - easy peasey lemon squeezy… 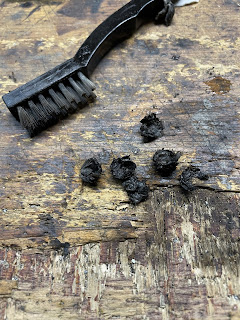 Yeeccchhhttt.
There is some schmag and corruption left after
shooting paper cartridges, but it cleans up
easy enough.
So overall.. everything’s preliminary right now, but I am going to call the paper cartridge experiment a success. Loading was much faster at the range, and would make pistol management much easier in the field.
Unfortunately, my poor gun gave up after the shoot. It stopped indexing the cylinder  and when I got it home and took it apart… the hammer hand had broken. Getting parts for these can be a real bear in Canada, so we’ll see what happens. I have inquiries in with Taylor’s in the US, and I am activating my spy network in hopes of finding a source for spare parts… and it will take some time. For now, that will be all for the front stuffing soot burner.
Posted by Glen Filthie at 06:47