I am just laughing like a loon. The faggotry and liberals are all howling mad that the tyrants they voted for are planning on bringing back the masks and lockdowns… and it’s all your fault, you Covitard! You maskhole!!! HAR HAR HAR!!! But don’t you DARE suggest it’s the fault of all the human trash flooding over the borders!!!! You racist chit!

I personally am not too worried about the “vaccines”. They kill about as many people as the chinkypox… one in 100,000? The risk is minimal, from what I can filter out of the BS, it’s more of a placebo than anything else. It’s the principle that hacks me off. That, and where this is all going. Gazing into my crystal ball, here is what I see potentially coming down them rattlin’ liberal sewer pipes: the next lockdowns will fail. The fake vaccines will fail. Idiots like Aesop and Comrade Misfit will amplify and magnify the fear porn spewed out by the media. They’re driving themselves mad with it right now, and the placebos won’t work. And…they know who to blame. Eventually they are going to do something stupid, and they’ll win a stupid prize… and then it’s stupid prizes for everyone. 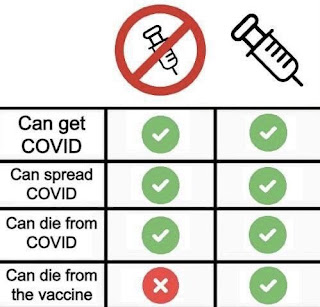 Regardless - I am not taking that vaccine unless I am absolutely forced to… and maybe not even then. Whatever. Those horrible wanks over at Blab may have found an excellent way to formally defy TPTB on this one. As for me… I tend to be covert about these things. Personally I doubt this legal challenge will work. The lefties have thrown science and morality under the bus with chinkypox… they’ll just throw the law out too. And that’s when the stupid prizes will start going out.

Stuff like this really calls public healthcare into question for me. This is highway quackery.

The time draws nigh to do unto others - and then split! This may or may not be my hill to die on, but I’ll let you know! Better hills with better views are certainly possible in the days ahead. Best of luck to you on whatever hill you wind up on.

Have a great Friday.