I have had great sport tormenting fags like M and Jack with my yuppie-compliant, soyboy approved Jetboil camp stove. I used to do some motorcycle touring and liked the convenience and utility of the thing. All it ever had to do was make coffee and heat up MREs. 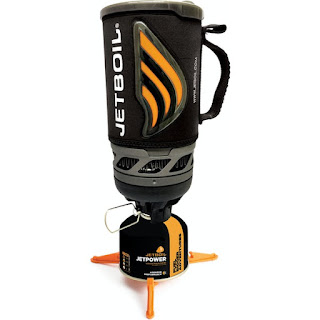 It's advantage over the old school Coleman Pumper Upper stoves is that it is a tad smaller to pack up and space is a bit of a concern on motorcycles and backpacks. And it will boil water faster than anything else out there. In Canada, we can get two sizes of butane bottles - the little one goes for about 6 bucks, and the big one goes for about $8.00.

But like M and Jack, I really prefer the pumpers and naptha stoves. Most of that is nostalgia - all the cool guys camped with them so I had to too. I suppose I might tolerate the faggy MSR stoves... but my heart belonged then, as now, to the big green Coleman fatties. Mine ran in everything from -30C to +30C and it did get cranky and difficult at the low temps... but all stoves will. Otherwise it ran like a top for years and made for many fond memories. I did a couple parts kits on it and threw it out when it just flat out refused to work. It was a foolish mistake on my part; the guys tell me that you just have to tear the thing right down to the last nut and bolt and start cleaning. Damn - I still regret making that mistake 10 years later! 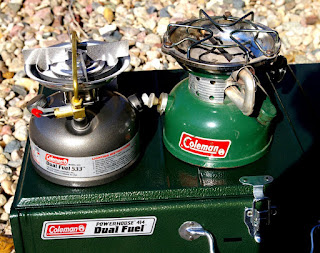 Where do you buy the little single burners now?
Neither MEC nor Cabelas carry them....
A four litre can of naptha goes for about 25 bucks.

I have taken a lot of much-deserved flak for the Fartboil stove; as M notes, the old green ones are more economical, more robust (I think), and have the comforting nostalgia of being around in better days when we were better people.

But that is us old farts talking, isn't it? Over on YouTube Corporal Kelly is probably one of the best bushcrafting campers out there. If you are a father looking for better ways to engage with your kids, you really need to spend about 20 minutes with this guy on his channel. This is how camping with kids should be done! He does most of his serious camp cooking over the campfire which is right and proper; but when he wakes up hung over and pished at the world as old men do everyday - he goes straight for the medicinal coffee and he doesn't piddle about with campfires, pumping up camp stoves or pouring fuel. 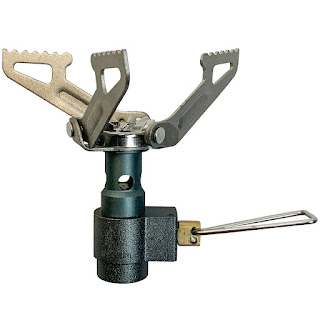 When guys like the Corporal are recommending gear choices - I perk up and take notice. I like the Corporal because he doesn't push the expensive, overpriced yuppie market garbage favoured by the metrosexuals and flimps at MEC. He pushes good, low priced equipment you can stake your life on. To him the camp stove is basically a throw away item - once the seals go you may as well just pitch it and buy a new one. I wonder what the service life is on them? It has to be up there. In any event, he has well made, low priced gear that would be perfect for the ultralight bush camper. I think he could set you up for a couple hundred bucks at the outside.

I wonder if the kids will remember these new stoves with the same nostalgia and fondness that we old stubfarts do with our old gear?