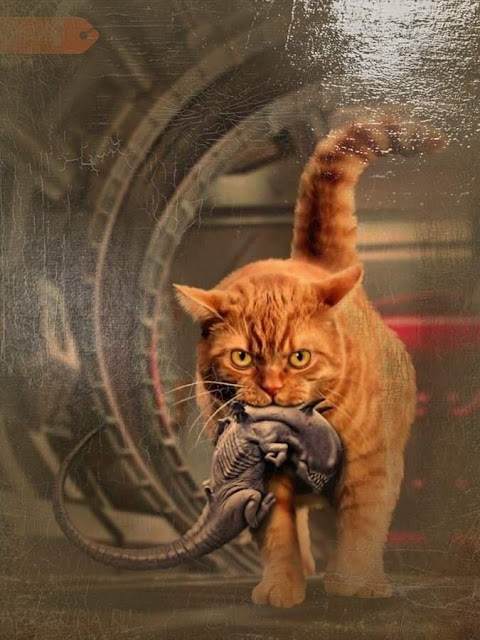 I guess TB got turned inside out and pulled through his own bunghole - by the family cat. HAR HAR HAR!!! Serves ‘em right! The orange ones are the worst.

My daughter’s cat was a grey one and she loved that little chit like a brother. One day he just disappeared. He was way too smart and fast to get run over by a car and I just didn’t get it. Did a hawk grab him? That didn’t make sense either, he was too big and fat and ornery for a bird of prey to get him… and he probably would have made a meal of the bird in such a situation. The days passed, and turned into weeks and the kid and I looked at each other with longer and longer faces as the time passed. Smokey Joe was MIA.

One day close to a month later he just turned up out of the blue as if nothing was wrong at all. One of the neighbours was saying that he’d come home from a vacation and when he opened the doors, a cat came bolting out as if he’d been scalded. Joe might have wandered in and gotten trapped when he left and went out of town. It had to be something like that because we looked for him every day and saw no sign of him. But what would he have eaten, and where would he have gotten water?

Perhaps cats can phase in and out of this dimension and drop into other ones where the hunting is better and time passes at a different rate.