Earlier in the week I took a new shooter out to the range. He'd bought his first handgun - one a those new plastic Sigs... P320? I think the Marines are using a variant of it now. I like ol' B. He is one a those guys that knows it all but I don't care. I am one of those guys that only knows two things - f*** all, and nothing, HAR HAR HAR! B's been giving me an earful for the last little while about what a great shot he is. He has some interesting theories on pistolcraft too. He goes to our church and is a good friend of the wife's as well so I didn't say anything. 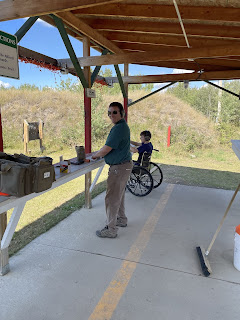 His boy is 14 and temporarily in a wheel chair. Seems the lad asked a dirtbike to do the physically impossible, so the machine broke his leg for his impudence. I saw the X rays too - there must have been about an inch between the bones in that pic. I cringe just thinking about it - but the lad is made of the right stuff and will be back on the bike as soon as possible.
Bruce shot like dirt. He did alright, I suppose, for someone with no instruction or experience and the humbling was good for him. I couldn't let him get away without at least a minor spanking - I put 5 out of 5 on the gong he couldn't hit for love or money. I was kinda surprised too - this was experimental ammo made from a bullet mold sold to me by AB. I had been having some teething problems getting set up for cast lead pistol bullets, but AB stepped in, gave me a few pointers and sold me some lead - and I was off to the races.
I woulda been happy if the ammo just cycled and fed properly and it did that in spades... but it shot well too. 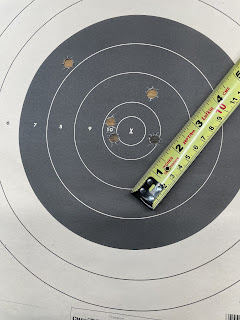 I'll be damned. Without that flyer it would have been a 25 yard solid two inch group... 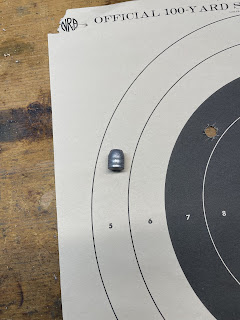 Here is the pic of the home made hero: a 200 gr.
flat point with home-made pot lube!
The classical 1911 45 ACP load is a 230 gr. round nose, moving at around 750~900 feet per second. A common load for that uses around 5.1 gr. of W231 - I have shot that for years with great results. But a flat point...? Mine is a match grade target gun and was Springfield's answer to the Colt Natonal Match Gold Cup gun. I am running HP38 rather than W231 but that shouldn't matter as it is virtually the same stuff. I kicked the powder charge up .2 of a grain and kept them on the slow side where I seem to do my best shooting.
B was flabbergasted. He thought I was an expert and I gotta admit that I started laying it on thick too. Usually offhand, my groups run 3~5 inches and I probly just got lucky here... but I dinkishly pretended that this was just par for the course and that I am a shooting champ, HAR HAR HAR!!! I am such a dink - and the gun gods will punish me for my arrogance and foolishness.
I can tell by listening to him that B won't take correction and/or coaching from a gas bag gunclub stubfart, so I kept my advice simple: get some snap caps and practice the trigger pull. Get a book and read up on the biomechanics of pistol shooting and practice what you read. Take a course too. I know B would listen to a trained teacher much more so than me.
Maybe I shouldn't lie either - part of the reason I was such a dink about my fluke shooting session was that he and his boy laughed at my beloved 1911. In their opinion I may as well have been shooting a flintlock! But I suppose old people should not be offended when young folks laugh at them. I should have taken it in good grace.
I'd really like to thank AB for all his help in getting started in boolit casting. Like B - when it came to boolit casting I thought I knew it all, when I was actually full a beans. What worked for my retirement rifles would not work with my pistols. With a few pointers from an expert - I am now up and running and can pass for an expert to the untrained eye!
Apparently AB has cobbled together an old 12 bore progressive reloader press and it's running like a top. If any of you guys are interested in a machine, pipe up in the comments and leave your contact info. AB is here in Alberta with me and will get in touch if you are interested.
Posted by Glen Filthie at 12:17