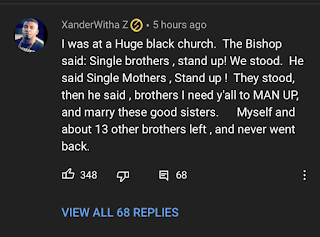 I’m still HARing about this one. It’s the classic example of how the church gets sucked into worldly affairs, thinking the faith can solve any problems it finds there. The wife’s church avoids commentary on current events and issues probably for exactly this reason. Times are so divisive now that if you have the wrong opinion or try to apply the wrong ethics to the wrong social problems and situations - half your audience gets up and walks out. I don’t blame those young men one bit and would have done the same in their place. For better or worse, women now are equal to men, and as such they and their families will suffer the realities of poor decision making the same as their men do, I suppose.

It’s one of the things that I wonder about and sometimes worry about at the wife’s church. One of her friends is a Christian all the way through, she talks the talk and she walks it too. There’s a couple of them like that, that get into outreach work and they end up dealing with some very shady and messed up people. Some are serious about turning their lives around, some less so. I worry about them. In my days as an atheist I had no time for such nonsense. When the missionary types came round, I wanted to get rid of them so I could go back to watching TV or sleeping off a hangover. I had better things to do, so I thought at the time. I was blind like so many today.

I am at a loss to understanding the stance of many churches too. They’ll scold their young men to ‘man up’ but never say a word about having their young women straightening up and flying right too. They seem to get a pass. I guess the feminist rage heads are right when they say the church is a patriarchal institution.

The proper way to have handled this would be to sit down with that cleric and having a few words about the birds and bees in the modern world, and making an effort to bring those young men back.