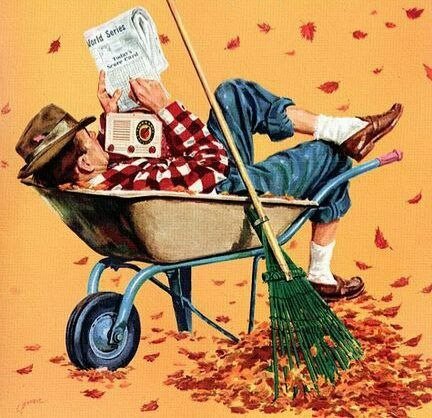 I find myself being hoist on the same petard my father was. I only just realized it.

When Pop retired he continued to carry a day timer with him even though all his time was his own and he had no real deadlines or schedule conflicts anymore. Pop was a man that insisted on structure and order even when there was no longer any structure or order to keep, and those things were whatever he decided they would be. I laughed at him then - I mean… what was he doing with that thing? Scheduling the lawn mowing and planning dog walks weeks in advance? HAR HAR HAR!😂👍

Now I find myself in the exact same boat as I struggle with long term unemployMINT. My day timer is downstairs in a box underneath my steel toe boots, business card holders, hard hat and other work crap. But although I understand Pop… I’ll be darned if I am dragging that thing out again. But without it… I found that I became a procrastinator. It really is the damnedest thing. It is so easy to look at the more unsavoury chores and just say, “Screw it! I’ll do it another day!”. Everyday I’d see some little error, or some misalignment in my universe and say, “One a these days I am going to fix that…” and of course, the day never comes. At work you’d get shot for that and rightfully so. But the temptation to do that when you are off the clock is almost irresistible. At least for me, it was. I started shirking and slacking without even realizing it and if ya do enough of it… you will get mentally constipated and be left out of sorts. Procrastination, shirking and slacking are deadly sins and vices that’ll creep up on ya if you’re not careful.

Rather than dragging a day timer around like Pop… I started up a covert chit list on my cell phone. Nobody knows it’s there but me. And every time I see something round the castle that doesn’t pass muster, it goes on that list and by God… eventually it is going to get done or fixed come hell or high water. Every day I set out time for the especially loathsome chores and force myself to get them done… and gawd does that feel good. There is something satisfying about knocking these things off a list. I need to do more of it. The biggest hell of it is that there is still ample time for R&R. A lot of problems get worse if you ignore them… a stitch in time and all that I suppose.

I wish you all a restful Sunday, and that you have the satisfaction of a rest well earned. Thanks for stopping by.