Whenever folks come across something that is begger n' better than the standard fare, they prefix it with "Texas". Texas Toast is just thicker slices of toast. A Texas Mickey is just a big bottle of booze.

Friends, if you want to denote something is amazingly huge - instead of Texas... say 'Alberta'!

I am swapping out the old shitters here at Castello Di La Filthie and was going to go back to the outhouse but the wife and Bylaw Enforcement shut me down. I told the Bylaw officer that I am a man and I'll poop where I want and if he wants to get stupid about it - he could just go for his gun and we'd settle it. But the wife gooned me with a rolling pin and I was forced into submission. I gotta change out my crapper and possibly another downstairs as well.

But if ya lookit down the hole there...good looooooooordmuthafuggah!!! There is a petrified turd in there bigger than a bloody Cullen!!! I think it died trying to climb out! A Texas Turd? I don't think so!!! That puppy is almost 100% pure Albertan beef!!! It's bigger than The Rock Of Gibraltar!!! In your face, Jack!!! 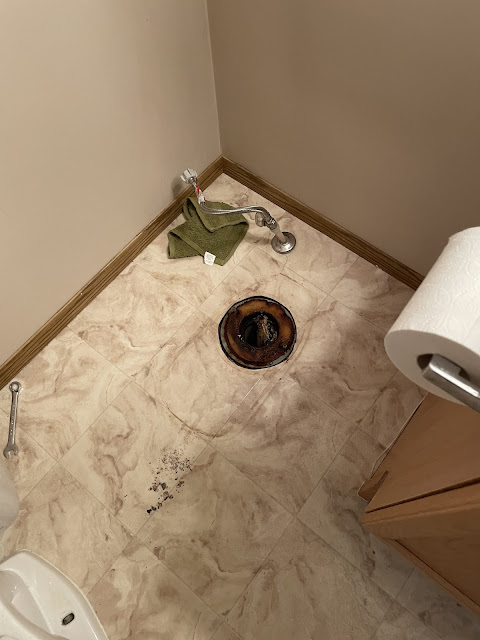 I wonder why it's flat like that...?
Scholarly theories are welcome in the comments.
Of course I will be signing autographs for the friends of The Thunderbox and VIPs like  WL Emery, Hillary Clinton and Barkie Obutthole. Make a note! I suppose I better send one to the Prime Minister's office too.
Now if you'll excuse me... I am going to pull that sucker out! Think I'll put this Alberta Turd up on the wall beside the deer antlers.
It's a big day for big things here at the Thunderbox!!! Thanks for dropping by!
Posted by Glen Filthie at 09:23