Do I understand this right? Creepy Joe has mandated the vax for everyone EXCEPT congress, postal carriers and Hollywood celebs? Or is this fake news? Nothing those idiots do surprises me anymore. If it’s true… the people going along with this have to ask some serious questions. Fat chance a that, eh? They are still seeing Orange Man under the bed and in their closets at night.

The other day I took the dawgs for a walk and all the school kids were out. Only a few wore masks so compliance is dropping like a stone… so that is encouraging at least. The way to deal with Karen is to tell her to FOAD. In my experience nothing less will work.

I dunno why that is. 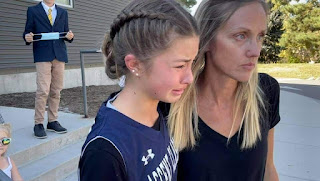 My heart just broke when I saw this one on Blab. The story supposedly is that the school volleyball season is kicking off, and the poor sprout is getting kicked off the team for not wearing a mask. (Who knows, what with fake news being what it is)… but assuming it’s true - I develop a split personality over stuff like this. Part of me would tell the kid to put on the mask and go have fun… and part of me would want to kill somebody. If Mom is driving this…is she a bear, for forcing her daughter to take the brunt of the politics? Or a mom doing her job and taking the kid out of an abusive situation?

It’s like a dirty divorce where the enraged couple use the kids in court as pawns to get at each other. One way to look at it is to let the girl make the call. The world is what it is, it’s going where it will go, and in that world the only one that loses out for skipping out is the girl. At some point she will have to make her own way in the world and her own place in it. The hell of that is the kid will always choose the path of least resistance, she’ll follow her heart and dreams instead of following a plan…and end up like my daughter - a 36 year old kidult with half her life gone, and being forced by reality to struggle with an increasingly meaner world with a 13 year old’s perception of it.

If mom sticks to her guns and makes the sprout do it too…these little things can turn mole hills into mountains and create lifetime animosities between them.

My prayers and heart go out to families in these trying times. I hope this Mom and daughter ride this out with no long term hard feelings. And I thank my stars I am no longer a parent.