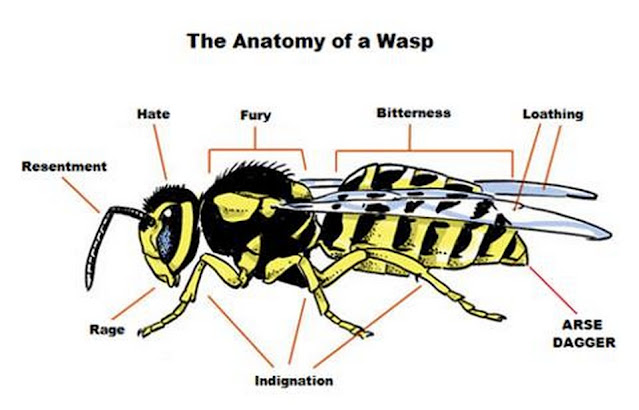 Well the sonsabitches are finally letting up this year. It is starting to get darn chilly at night. We don’t freeze yet…but it comes close, some nights. The ones at the rod n’ gun club were just horrible. I got bit for the first time in decades.

I don’t take shit off bugs but I don’t disrespect them either. Honey bees are flying pussycats and wonderful neighbours if you don’t get them mad, and most yellow jackets can be gently shooed away. I do a super fast swat on the really aggressive ones to stun them and step on them and butt them out like a cigarette when they fall. Once I had one try to bite me and he menaced me for five minutes straight. He was too fast to swat, and I was too fast for him to get a grip on. I danced around swatting and flapping and gobbling in fright but no way was I going to run. I finally tired him out and deftly swatted him to the ground on the garage floor. Probably broke something… he was crawling round on ground and couldn’t fly. I was so damned mad at that point, I grabbed the Benz-O-Matic plumber torch off the bench, sparked it up… and went back to that bug and with cold fury I burned him down to ash! I understand hornet rage, but will not put up with it! Bastards. Hork! Spit!

The one that got me out at the club though, wasn’t aggressive at all. He was a sneaky sonofabitch that landed lightly on my arm, so softly I didn’t even feel it. I think he only got a half a stinger into me before I swatted him away. I wonder why they always get so mean and aggressive in fall…?