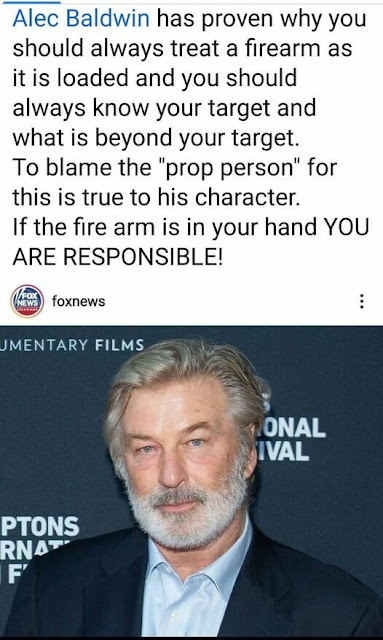 Anyone that forgets this needs a boot up the arse - including Yours Truly. I thought, “Baldwin is a thespian, not a gunnie - and is therefore innocent of any wrong doing. Gun safety isn’t his job…”

Ignorance of the law is no excuse. If ASM passes me a gun and I shoot Quartermain with it by accident, I am going to jail - and rightfully so. He should check the gun before handing it off to me. The second he passes me that gun, the onus is on me to check it - again - regardless of whether he says it’s unloaded or not. If I check the gun, play with it, and pass it to Quartermain… he MUST check it too - even if I just did it right in front of him. When ASM goes to put that gun away for a time he will check it again - even if he had eyes on us the entire time. It sounds like paranoia, but it is just good gunny etiquette. It is the required protocol for anyone that handles a gun. Anybody handling a gun should be aware of this… and if ignorance is no excuse for us… Nor should it be for Baldwin. At some point, that guy has probably had some basic firearms training, and he screwed the pooch and killed someone. He should draw the same punishment you or I would get - assuming our courts were run by men, and not kangaroos. Oh well. Fortunately he only killed another Hollywood moron, and she looks to be just another fart sucking liberal. I suppose at the end of the day it’s all good, HAR HAR HAR!😆👍

It’s a great time to consciously look at your own safety habits, and make sure they are up to snuff. Look at not only your own, but those of folk around you too. Bad habits creep up on ya… and getting bitten by them on the range or worse - in the house… is something we all want to avoid.