Because Fuck Justin Trudeau, That's Why 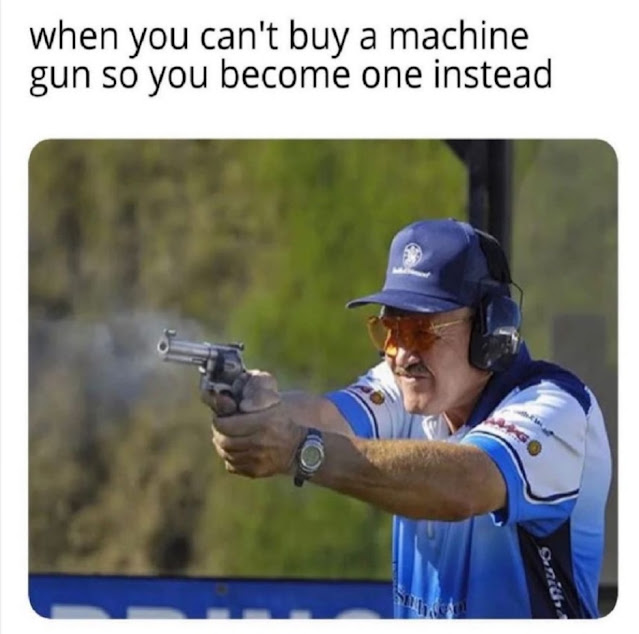 HAR HAR HAR!!!
When it comes to tactics and guns, my mindset has always been to 'reach out and touch someone' if that was what is called for. I watch the guys running and gunning, close range, at huge targets... and it strikes me as a waste of ammunition. If you let your adversaries get that close to you - even with the skills of Jerry M - your odds of survival drop by 50%. More, if you are facing off a trained gunnie. Contrary to Hollywood and the cool kids, the first order of business in any firefight is to avoid it in the first place. If that isn't possible, the second order of business is cover, and the third order of business is returning fire.
Not to take anything away from ol' Jerry - the guy is a shooting machine and you couldn't ask for a WORSE adversary in an actual gun fight. But I remember the old days of the metallic silhouette game where precision was the order of the day, and the custom built single shots were the king of the range. They had categories for production handguns and they were dominated by high end revolvers. The legends of the day were guys like Bill Blankenship.
The legend I have is that Colt had just launched their Delta Elite back in the mid 80's. They invited all the most prominent gun writers from the rag sheets to the product launch - and Bill was their product specialist. They wheeled out a cart full of the pistols at the range, but Bill was to shoot first. He went after the 12" gongs at 200m and knocked them down one after the other. Offhand. I was sold on the 10mm forever afterward... but never bought one to my disgust. I suppose Jerry is no slouch with precision shooting either - in one of his vids he was popping balloons at 1000 yards.
It is a mindset in the sport that is all too common and that's a shame. Kim du Toit earned my utter contempt and wrath when he once said 'the purpose of my pistol is to fight my way to my rifle'. If I ever face that old bastard... he will never make it to his rifle, of that I assure you, HAR HAR HAR!!! HAR HAR HAR!!! Like so many of the kids these days, he sells the pistol far too short of it's actual potential. It's a shame really, because there is lots of fun to be had with the precision end of the shooting sports as well.
Posted by Glen Filthie at 08:23