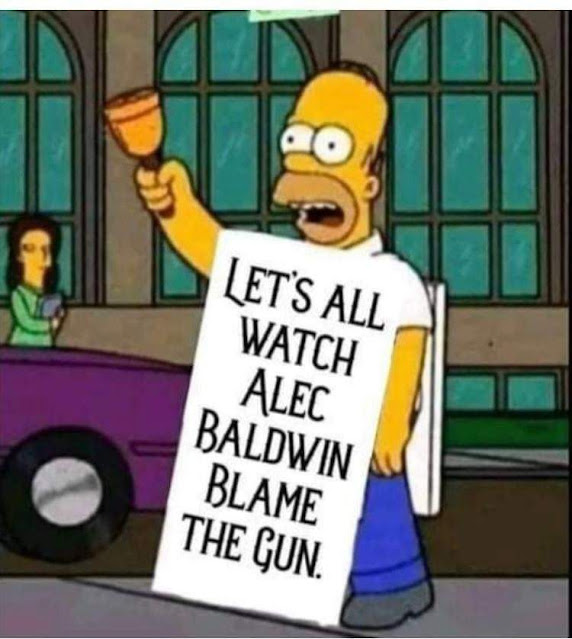 There was a time when I would have had to sit quietly and and listen to all the family shitlibs expound on stuff like this. In their world, guns accidentally go off all the time for no reason, and if a dreamy movie star like Alec Baldwin can't handle them - how can an ordinary stubfart or Fudd be expected to do it? Why - anyone that actually wants to shoot an icky gun has issues! I never told them to FOAD back then - but I do now. No conversation is better than a dumb one with those kinds of people. Any conversation with gun grabbers starts and ends with two words.
So still, I am not sure what happened here. They say the killing was done with a 'prop gun'. To me a prop gun is a facsimile that doesn't actually fire live ammunition. Typically they get brought out in scenes where the guns get thrown around, dropped or abused. They tend to be pretty good too - I saw the one for Jurrasic Park - a hard rubber rendition of the Marlin Guide Gun. It was a dead wringer for the real gun - you'd have to get your nose right up to it to see the imposture. If a gun accepts live ammo and fires it... sorry, it ain't a 'prop gun'.
Much as I'd like to see Baldwin take the fall - he is likely innocent. If the killing involved live ammo, somebody else in charge of the guns committed murder. The person that loaded the gun is the perp. Plain and simple.
I am not familiar with blanks, but I am told that they can be lethal too at very close ranges. If the killing was with blank ammo... then maybe Baldwin CAN be hung out to dry. A man in his position should be familiar with blanks and prop guns, and if he hurt someone with blanks - he should be punished for it. With blanks I can shoot one at you from a few yards away and it will be harmless. If I hold a gun firing blanks to your head - up close - yep, you are going to get hurt.
It's going to be fun to watch the gun grabbers try and spin this one. Baldwin is a major fart catcher for the communist left - and I won't pretend that I don't enjoy watching him squirm. At the very least I hope it ruins his career.
Posted by Glen Filthie at 08:00