The Rise Of The Witch

I love The Dissident Right. They can basically be summarized as the kind of guys that have the wrong opinions, ask the wrong questions, and will not be shamed or deterred from asking them. They are just as merciless with the conservative poseurs like the RHINOS and cucks as they are with the neoliberals. They are not necessarily rude (they certainly can be), but they use humour and wit to devastating effect. They are a rising force in the political landscape today, and I wish them all the best.

Just in time for All Hallows’ Eve, the Z Man does a fantastic presentation on witchcraft and witchery.

On his recommendation I bought the book, Witches, Feminism And The Fall Of The West. The book offers a really fascinating take on the old infamous witch burnings and hangings of the 1700’s. If you’re like me, your narrative of the witch burnings will be one of superstitious, hyper-religious zealots that attacked innocent women as a way to instil fear and further their own authority and power within their backward communities.

Ed Dutton believes that that is possibly total hogwash. The witches of old bear a striking resemblance to the feminist hags and contentious harpies today. They gossiped and turned people against each other, they started rumours and made false accusations, they drove rivalries and division and undermined their families and communities. Back in a time when mere survival required super strong families and communities where everyone had to get along just to survive … people like that were cancer, and the witch trials were the logical way for communities to deal with women like that. In their eyes, those women had to be truly evil to do such things in those times.

I am only a chapter in, and haven’t had time to mull over Z’s podcast… but I note that there are scads of men tied up in this unholy attack on ourselves too. And I get how many of them are being driven by women to it. I’ve been there done that and bought the tee shirt: my lesbian daughter gave me a manifesto of ultimatums on how our new rainbow family was going to work - and it was lunacy. But the family’s matriarchs sided with her. Their men either backed them up or refused to take sides. I decided a family at war with itself wasn’t a family at all and checked out. Others soon did the same. Were those women in my family like…witches? Evil…?

I suddenly find myself very uncomfortable. Often there’s a fine line between stupidity and evil, and to be fair, my mother in law is as dumb as a post. But my mom and daughter though… are very smart women. But they are not happy women. My brother and father in law were put through the bloody wringer by their wives. Pop is a question. He loved his wife but he wouldn’t take shit off her, and when I was a kid they had some barn burner fights. I can see how an old patriarch, living in a spiritual, haunted world where women like these could mean the difference between life and death - might decide that if they couldn’t be brought into the game, they’d have to be taken out. Permanently. Such a man would not do such a thing willingly; he’d have to be pushed to it by only gravest, most dire necessity. The narrative of the witch trials being senseless attacks on women doesn’t hold up to objective scrutiny. 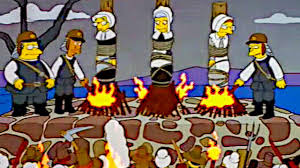 In my case… yeah, I could do it for yuks.
I see a crackling blaze, and picture myself lighting a cigar from
a taper out of the fire…ahhhhhhhhh.
The thought of it induces a state of serenity.
😂👍
What really blows me away is how many of the loons that are responsible for our new woke and enlightened moralities will also be the first to admit we live in mad times, and a mad world. And they are totally incapable of seeing their own hand in it!
I hope that you are prepared for the witches and spooks that will be out in force tomorrow. You might want to check out Ed Dutton’s book too. It makes for some fine thinking and reading.
Posted by Glen Filthie at 10:58