Everything tells a story… Even an old gas mask satchel has a tale to tell - love, war, determination, loss…

When Sallie Durrett Farmer of the U.S. Army Nurse Corp (ANC) set sail for the Philippines prior to World War 2, little did she know the role this small satchel would play in her life.

With her little bag at her side, she found love; enjoyed adventures in a foreign land; was soon engaged to a U.S. Navy pilot.

Tragically on May 6, 1942, her world changed when U.S. forces surrendered to the Empire of Japan in the Philippines. The horrors of the Bataan death march and prison camp were now her future.

As Americans were stripped of their valuables, she was determined to keep her engagement ring. It was all she had left of the man she loved and the world that existed prior to the war.

Risking execution to keep the ring, she quickly stitched a hidden compartment in her satchel. After a thorough search by Japanese soldiers, she was given permission to keep her bag.

For almost three long years the little satchel cradled her hidden treasure… a symbol of love, in a world gone mad. It remained by her side through each trial… each tear… Enduring the long suffering as a POW.

While her pilot did not see the end of the war, the symbol of their love finally found freedom when Sallie was liberated on February 3, 1945. This beautiful symbol survived the evils of war because of a determined woman who didn’t give up on love and a tiny little satchel that never let go of its precious cargo… 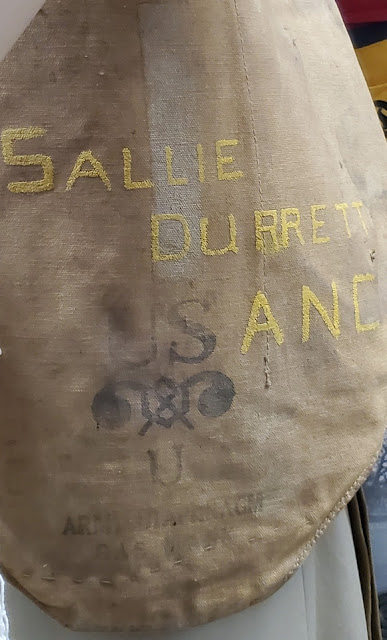