Modernizing The Lever Gun WITHOUT Faggotry

The poor ol' traditional lever gun. If the gear queer smooth boys aren't trying to tacti-pimp it... they are trying to give it a sex change. 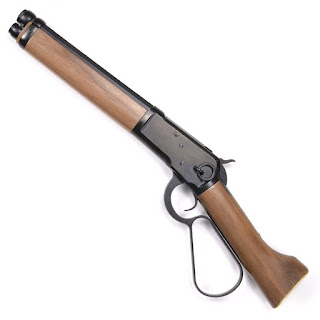 Every time I see one of these, I want to
take it away from its owner and flog him with it.
It's no coincidence these things are commonly called 'Mare's Leg' rifles. Any kind of accurate shooting with these abortions is pure fantasy. Up here they sell them to the yuppie 'back packers' that know nothing about guns but what they see on TV. Them - and the asians. The clippers nine irons just love the guns they see in their favourite anime cartoons. GAH!
Leaving the rainbow warriors and vibrants behind... the lever gun CAN be leveraged well into a role as a variant on Jeff Cooper's famous scout rifle concept. That sweet little guide gun from Marlin gets you halfway there right out of the box! I had one years ago in 45-70 and that SOB was one versatile gun. With jacketed Remington 405 grain round nose bulk bullets and patty-cake target loads with RL7... that thing would almost go sub-MOA. It would put those things into groups of 1.1 and 1.2" all day long. With other bullet weights and brands it seldom ran much over 2 MOA off the bench. All that went out the window when you stoked it though and top tier hot loads would kill on both ends of the gun. I ran mine with a Leupold 1-5X variable. I loaned it to Flapz and never got it back. I wonder why, HAR HAR HAR!!! Y'know... if I'd been smart enough to use fillers on those patty-cake target loads... I bet I could have gotten them under an inch at 100. I'll never know... because I'd probably have to kill Flapz to get it back!  That... and find Rem bulk bullets. I bought about 500 of them and then never saw them again after that.
I'd love one today in a more recreational calibre like the 45 Colt. Something maybe a little like this: 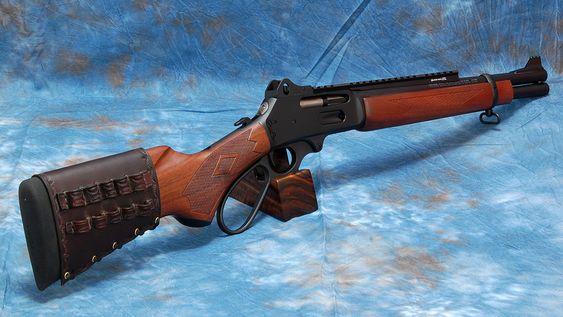 Those cartridge carriers look great for the glam pics,
but don't use them. Carry your ammo
in a tasteful and stoutly built leather ammo pouch.
You will lose less rounds that way.
Your son's Red Ryder is bigger than that! This'd make the perfect bush gun where shots at game are really short - and it would be a total laff-riot out at the range on the bigger 200m gongs. If you run reloads with cast lead pills and take care of your brass, the beast would make an economical plinker too...If there is a better gun for the bush country stubfart... I have no idea what it possibly could be.