What happens to folks when they get old and stupid? And whaddya do about it? 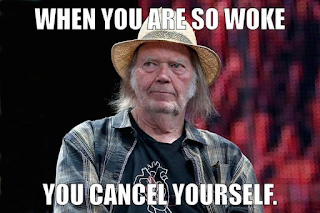 Is he woke? Or just old and stupid?

My folks are the same. Mom decreed that the unvaxxed are unclean, and will not be allowed in her magnificent presence. Oh darn, says I. Mom has holed up in her house with her jigsaw puzzles and lunacy and I am persona non grata. I dunno what I’ll do now, without that rancid old bitch to scold and nag everything I do! HAR HAR HAR! But it used to really tear me up inside. What if she takes a header down the stairs? What if she falls and can’t get up? But… she’s lucid, she’s an adult who has decided to make some very childish decisions and her husband is too. She is within her rights to insist on Covidian rites and rituals in her home and the govt supports her when she tries to pressure people and impose it on others.

Neil Young shares a lot of traits with mom. He’d not hesitate to open up his trap, exercise his right to express his own opinions and screw you if you didn’t like it. And just like mom - it was an absolute unforgivable sin if you dared to do the same, or dared to disagree. And if you got stupid about it…well then, all’s fair in love and war - and both of these bitches aren’t shy about going to war with people, HAR!

I just read that the guys at Spotify will not be giving in to Neil’s ultimatums that they either cencor Joe Rogan and his Chinkpox heresy, or stop playing his music. Doing the math, Rogan is worth millions to them, and Neil is a dirty old washed up hippy who’s no longer relevant.

But that’s what these folks do; they hold a gun to their own heads, and say, “Do what I want or I’ll shoot…”. At some point people get fed up and just shrug. It’s a shit test where at some point… everyone fails it!😂👍 What do they call it? Emotional blackmail?

If mom falls and can’t get up… welp…she put herself in that boat, and there’s not a damned thing I can do. Neil blew up a deal that was good for everyone - most of all himself - and only has himself to blame. I’m sure he has the money to throw away… but part of me still wants to feel bad for him. In his day, he gave the establishment the finger it so richly deserved. Now he’s a shill for it.

There’s a point though, where they go from being free people that make their own decisions and take the consequences… to being oldsters that need a steadying hand to keep them from hurting themselves. I don’t have the wisdom or heart to make that call either.

At least… not yet.