I was just over at the Z-Man's where the big kids were telling horror stories - sounds like Cankles Clinton is going to take another run at the presidency. Electoral shenanigans will obviously needed to bring that about... but whadda I know? 2024 is an eternity away in political timelines. I don't think the idea is far-fetched though - they've hijacked one election and gotten away with it, who is to say they can't do any number of them? You're going to find out - if I've said it once, I have said it a dozen times. These people won't stop. They'll have to BE stopped, at some point. I personally believe none of that will happen until people start going hungry and the lights go out. It won't be long now. 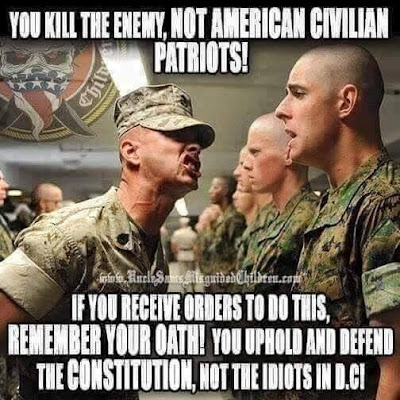 The military will be the wild card in what is to come? For me it's a hard one to read... the military is not the same as it used to be. It's run by the wrong people, and the squaddies are now forced to submit to all kinds of indoctrination. I heard the squids just tacked on two weeks to their basic training so that all the new hires get a firm grounding in wokeism. I can see a LOT of officers getting fragged by opposing factions: the normies will frag the fags and the fags will frag their normie officers... assuming things get that nasty. I can't get a read on it. How will the squaddies go?

Which way will they break?