Perhaps A Mutual Old Friend, For Some 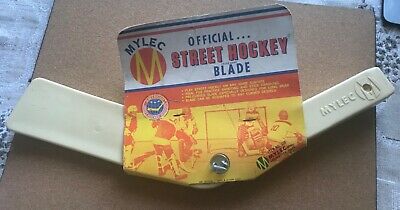 I've been on both ends of this one. When the old man wasn't around, ya grabbed his propane torch, and carefully heated him up and then put a curve on 'em. You could go as little or as much as ya liked, and for us, we set these things up with the solemn seriousness with which the most skilled bladesmiths forged their finest broadswords. We all broke a couple sticks a season so we'd hack the blade off and keep the stave around for refit with these. You could put on a sporting curve for the casual street hockey games - or put a bend on him so radical that you could pick  that puck and up fling with speed and precision that was absolutely lethal. We quickly learned that even for street hockey - ya padded up the goalies with all the kit they used in a real game. That, or use a the pussy's sponge pucks.

My pads weren't bad but were thin on the upper portion of the leg - from the groin about halfway to the knee. All I had there were polymer plastic shells and a hit there would leave me gasping in pain with my eyes watering. JEEEZ....!!!! That HURT!!! It was so bad I was starting to get gun shy. So I ran it all past Pop. He almost burst with pride when I brought the problem to him - these were the kind of problems he was born to solve. When he was a little nipper back in the 40's, pads were unheard of - so they used rolled up magazines and newspapers.

Obviously that would not work for us - our at least, not our comic book collections. I grabbed one of mom's TIME magazines and a womans's magazine - trimmed them to shape and wrapped them in a soft towel (the good ones in the bathroom of course - they were soft and fuzzy...) and with some creative taping I fitted the extra bulk under the leg plates ... and that particular chink in my armour was closed. It is one of my most cherished childhood memories... HB was one a Big Bro's friends and one day I discreetely over heard them cursing. "Fuggin Filthie - he's turned into a damn wall! NOTHING get's past him...".  My dear loving brother piped up, "Just aim at his crotch or just below - that's where his pads are thinnest..." It took a whole winter for those turds to figure out I had filled the chinks in my armour - and they'd have to do better. They started shooting at my off side and for awhile that worked like a charm... but a few nights on the firing squad after school - where the guys hammered me low and right - and I could parry those shots too with time.

This is what serious business looked like, when I was a kid.

May your business today be your own and light! God bless you guys - and have a great Sunday.