My feud with the philosopher/blowhole from California ends today. Listening to him, the Russkies are dead men walking. He started out by saying the Russians would be defeated in a matter of weeks. Months later, he’s telling us that any minute now, they’re going to fold. Yet every day, people that went to fight the Russians on the ‘Kraine’s behalf are coming back, having seen The Bear up close. Granted, most of those are guys that would be right at home on a Reddit fat farm… but there’s a lot of squaddies and mercs that misunderstood Russia’s intent and resolve. I’ve seen their bodies on Telegram. Ivan is not fucking around and the dummies among us are going to find out. 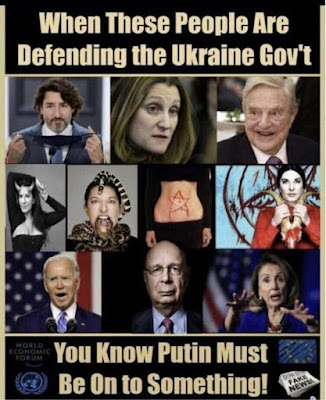 I think now that the seriousness of the situation has gone from an entertaining tard-fight to something more serious, the rest of us had better get serious too.

I like Gonzalo. I think he’s panicking a bit… but like me, he understands Russians and the way they think. This is exactly how I would play it in Putler’s shoes. He doesn’t have to worry about morons like Pelosi and Biden; the Americans will kill them for him when the consequences of their “leadership” really begin to bite. Keep running your mouths and laughing at your gas and grocery bills, f-tards…just be aware that what goes around comes around. You heard it here first!

Personally I don’t think things will get that bad. If they do some of the following things will start to happen:

Reality has a nasty way of asserting itself when the stakes get high. I don’t think we are going to starve here or in Europe. Vlad will get his deal, plus however much of the former Ukraine he decides to keep. We will probably go bankrupt. And while that is not a good thing… it is survivable.
Check out Gonzalo and, as always… your two bits are always welcome in the comments.
Posted by Glen Filthie at 02:00