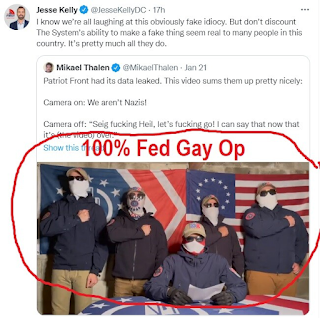 So what’s going on here? The wanks over at Blab are still squawking about it! The story I have is that these guys are bunch of dull stubfarts that showed up to protest gay pedos … and they got bagged by the FBI, who are as usual, taking credit for preventing the rise of the Fourth Reich.

I dunno what to think of this. Sure… ya gotta be pretty dumb to show up for something like that. Protests are nothing more than street theatre and sometimes brawls. I certainly have no interest in brawling with the druggies and turdies of Antifa, the disgusting faggotry of gay pride or the feral niggers of BLM. Those guys are protected classes and until civil war breaks out…nothing will be proved in the street or done about them.

I just find it odd: ain’t it funny how the FBI is there every time to thwart the aims these clear and present dangers to the nation … but they can’t prevent school shootings, acts of terrorism, or other criminals that raise multiple red flags before they do the deed.

They are hell on wheels confronting the fat old stubfart oath keepers, the childish proud boys … and this latest bunch of the Loyal Order Of Water Buffaloes. They bravely caught the grannies, drunks, and tourists who were in the wrong place at the wrong time during the Jan. 6th Insurrection. But when the guns come out and the blood flows… they’re nowhere to be seen.

Somewhere along the line, the judiciary and law enforcement have been taken out and replaced with fake and vibrant gay actors… or so it’d seem to me.

Enjoy your reign, Weimar America. It won’t last much longer…