Yesterday was the best day I have spent on the range in a long time. King Peter had two new rifles to wring out: A high end semi-custom rifle in 7x64mm Brenneke... and a chit house econo rifle - a Howa in 223. Part of my excellent day was spent enjoying Pete's misery! Sadly, this is what passes for entertainment with old stubfarts. Pete was having a rough day and it showed up on the target. He bought the Howa econo rifle not knowing that it came with a cheapo 3x9 power scope. He couldn't find factory ammo other than the cheap steel cased chicom garbage. I dipped into my stores and gave him some green tips and some of my hand made practice rounds and he couldn't shoot those either. Pete is one of those guys who is an expert but I can't be bothered fighting or arguing with him - so I just settled in behind the spotting scope and let him run, calling his shots for him. He got so rattled that he made me sight the rifles in for him. I don't like the way Pete bags up - which was part of his problem - so I dug out my own and settled in. I cut his 5" groups with the 223 in half which is certainly not something to brag about... but we know at least the rifle is not damaged. It won’t be a tack driver… but it will be an excellent candidate for a ‘build out’. I am trying to talk him into a new barrel and a Timney trigger but we’ll see how that goes.

Then he insisted I look at his high end rifle. I don't like shooting off the bench as I am not very good at it, and will only do it to evaluate new loads. I got up on my hind feet and tried a few offhand. It was a strange rifle for me: it had a 25" sporter contour barrel, a big meaty and flawlessly checkered stock, and was relatively light and oddly balanced to my hands. I threw the first shot and called it in disgust - and helped myself to two more rounds of Pete's ammunition. I could tell by the feel of the first shot that I'd thrown it... but the second two felt just right. The trigger broke like a glass rod and I knew I'd placed them well.

So I look over at Pete on the spotting scope - and he looked like he'd swallowed a turd! I punched two rounds, both bullseyes - about a half an inch apart. It was all a magnificent fluke, of course, but I couldn't help myself: I played it cool as if I did that all the time. "I could get used to a gun like that, Pete - but would have to get a decent scope on it...." Pete looked like he was ready to spit, HAR HAR HAR!!! Like I said... I was having a great day! A great day being a big dink! HAR HAR HAR! I couldn't do that again in a month of Sundays! :)

I did manage to get a few shots with my mighty 243 Win single shot though - my beloved Ruger No. 1. 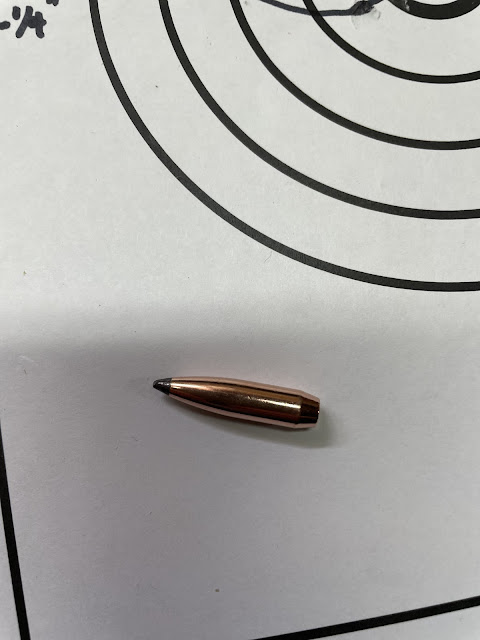 Ammo and reloading components are getting to be a scrounger's proposition and couple weeks back I spied some of these on the shelf and bought 300 rounds - and cleaned them out. That is the Speer 100 grain Boat Tailed Soft Point bullet. They were 35 bucks/100 so I said 'what the hell' and stocked up. 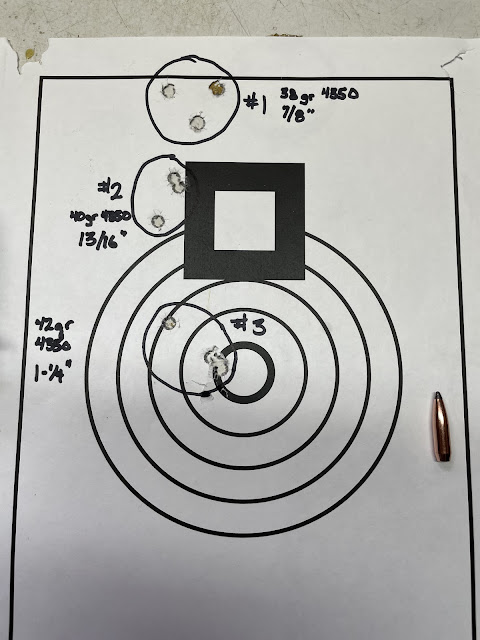 I had to rush these because Pete was sad and in a snit and wanted to go home. The gun was heating up and I pulled that one flyer in group #3. If it weren't for Pete I would have spent more time and chronographed them too. Results were pretty good for cheap bullets - certainly good enough for range practice. I loaded up the rounds in increments of 38, 40, and 42 gr. of IMR 4350.
Results are intriguing, anyways. The brass all looked fine with no signs of pressure and ejected easily. For my next trip, I will repeat the regimen only with a chronograph this time. I have room to bark up the charge weights if I have to... but why bother if you are getting the velocities?
If you see these bullets kicking around and you are wondering if they are worthwhile... I would say that based on my limited experience... go for it!
As for Pete - lest you be feeling sorry for him and my rude treatment of him - he got me back in spades. I was surfing for ammo deals on the net and found a supply of these at a local store. They had 700 rounds in stock. While I sat dithering about it... somebody bought the lot and cleaned them out. Guess who the culprit was on that little caper?
I guess Pete and I are now even....   :)
Posted by Glen Filthie at 14:24