It's time for the fabulous Filthie awards everyone! This is where we roll out the red carpet, invite the celebrities, and celebrate the hard work of Globohomo script writers and knob gobblers and recognize their efforts in front of the world's most glamorous ignoratti! The build up has been incredible! Last week in the rehearsals, Pete bitch slapped Cederq when he cracked a rude joke about the wife! The Ohio Guy complains bitterly about the endemic racism of the awards, and seethes about the lack of diversity! The tards  are all a-flitter with controversy, excitement and anticipation!!!!

So, without further ado… The winners for Gay Pride Month are as follows:

This has to be the Poast Of The Year! I am still HAR HAR HARing about it! Check it out! Ol' Cow Cnut spun up the Estrogen Engine, threw it into menopause - and floored it!!! I haven't laughed this hard since Elizabeth Warren broke down and had a hissy fit when the supreme court came out against the democrat/abortion complex, and she did that angry chicken dance for the cameras. On behalf of the Russian Federation, Comrade - thank you for your work in the comedy entertainMINT industry! Don’t ever change!🥰 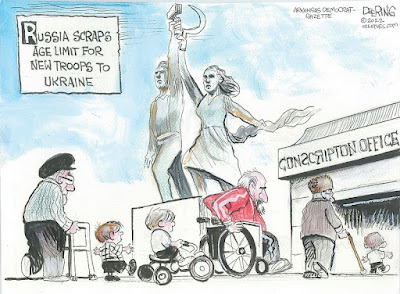 Unbeknownst to Nurse Aesop, the Ukes supposedly did the same thing a month or two ago. For myself, I have seen no evidence of it. The Russian military, for all intents and purposes, looks much like the American one in composition by age demographics. Conspicuously absent in the Russian military are the trannies, queers, women and vibrants that infest the American military these days. What Vlad is going to end up with, at the end of this war, is a blooded, experienced military that has seen peer to peer combat - plus all the territory he takes from the 'Kraine. It has been a fascinating thing to watch. If you recall, WW1 trench warfare is a big thing in the 'Kraine. They couldn't fight a 21st century information war because all their specialists in it were dead within weeks. The only way the Ukes can do it is if the Americans do it for them. So it was when they sunk the Moskva - the Americans had to give the Ukes the coordinates, they had to feed them into the missile flight computers and about all the Ukes did was push the button that launched the missiles.

The Russians are finally starting to become adept at modern information warfare. Apparently they just smoked three Uke generals that met at the wrong time and place. They are having spectacular success with drone and antidrone warfare.

Getting back to the original topic though... I am not really seeing any real evidence that either side is conscripting seniors and children. The videos are graphic and all the bodies I have seen are fighting age men. But - whadda I know?

I DO know that Telegram is an absolute must for studying this conflict in any detail. Real experts are the ones to listen to, not the talking heads in the mass media or the gas bags like Aesop. One of the best single sources I have come across so far is Matt Bracken. He is a treat to watch on the podcasts he does with this mexican fella - Matt is an awesome intellect and an obvious expert on the region but he is also a bit of a blabbermouth - and the mexican kid does a good job of keeping him on topic and forcing him to explain himself in greater detail when necessary. The two make an awesome pair of pundits and are a pleasure to listen to.

For now things seem to have slowed down a bit and who knows what's going on. I don't think Vlad is going to take the entire Ukraine - why would he want it? My suspicion is that he is only going to take what he can hold snd had value…and he is going to put a metric chit tonne of troops in the new Russian territory so that NATO can look at his troops on their borders - and scare the chit out of Poland and the EU. A new world order IS in the offing... and I doubt that it is the reset intended by the Globohomo Empire.

That’s it for this month’s awards! The Filthie awards are proudly racist, homophobic and sexist; production required the murder of puppies, kittens and ducklings, and belched tonnes of carbon into the environMINT!

Have a great Humoday all!