Well I have to apologize to everyone! I have only kept half an eye on the 'Kraine lately, in a clear case of dereliction of duty. I thought it was proceeding according to Russian military doctrine: last I looked, the Russians had encircled 3 or 4 towns, cut off any reinforcement or retreat, and were slowly pounding them into rubble and smoky cauldrons of blood and debris.  The Ukrainians recently admitted that they are losing 1000 troops a day now, with fatalities of near 50% in the cauldrons.

But... I shouldna thunk it! Apparently Putler is dying and/or probably dead already!!!

I kinda stopped reading Aesop for awhile too; for obvious reasons. But this one really has me interested. Ignoring the California Girl's ... harrrrummmmppffff...."opinion"... there is a link in there to an actual ordinarily viable source of informed opinion and commentary. Unlike our hysterical male nurse and armchair general, I tend to trust Martin Van Creveld. Jeebus, Martin. What in hell happened to you? 6 possible outcomes? Perhaps Martin is having a senior's moment?

Let us dispense with the fat old guys larping as tacticians. In point of fact, there are only two. To recap: Putler does not want ANY of the Ukraine. Remember his terms conditions before we basically forced him to take it:

Outcome #1. Vlad takes over the Donbas and uses the captured territory to menace Kiev and other Uke tactical positions. The borders are re-drawn. Pro-Russian citizens in the Donbas will stay, anti-Russian militants and terrorists will eventually be rounded up and executed. The Ukes will depose Zelensky if the pounding goes on long enough. Either way, Vlad gets his three conditions and however much territory he needs to control the Kraine. The Ukes are going to have to fold within the year at the most - and when they do, they will agree to ceding territory and complying with all three of Vlad's conditions of surrender... but the Ukes and Globohomo will try to spin it as a victory, and fags like Aesop will clap their hands with delight and see things the way their masters in the media tell them to.
Outcome #2 Somehow the conflict escelates to an exchange of canned sunshine. It's highly unlikely - I think you would see Zelensky and/or Joe taken out of play first... but if it did, Russia would lose, and General Aesop and his glee club would learn what a "pyrrhic victory" really was. 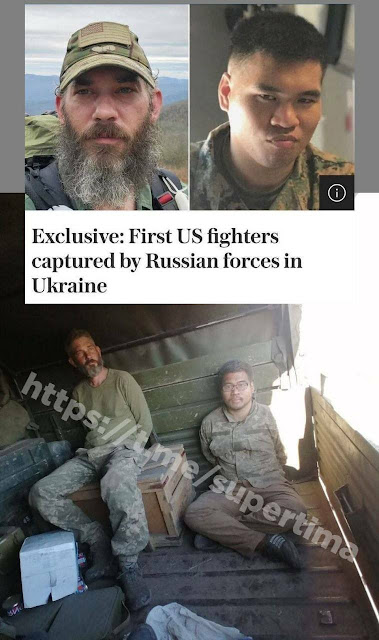 Neither Martin nor Aesop understand that Russia is at war. They don't care if they are not popular on Twitter or with the Globohomo mass media. This news above shows how cold blooded and determined the Russians are: large numbers of mercenaries and 'foreign nationals' are being captured now, along with the Ukes. Russia does not appreciate this, and these three here just went to court and received death sentences. Media slobs are confident that a prisoner exchange may be in the works - and the Russians will only go along if it is to their advantage. If it isn't - they will kill these guys and smirk with delight as the Twatter and Facecack mobs light up with outrage and fury. The ol' latrine graffitti from Iraq holds: Russia is at war... Nurse Aesop and Martin are at the mall.
But whadda I know? I am praying that the Ukes see reason, and stop letting themselves be used as expendable proxies for fags like Aesop and morons like Biden. Until they do...the bodies will continue to stack up.
The war continues apace in the real world. The Russkies are getting ever more proficient and capable and the Ukes are getting ground down that they can no longer bury their own dead. We will see, I suppose.
Posted by Glen Filthie at 08:41