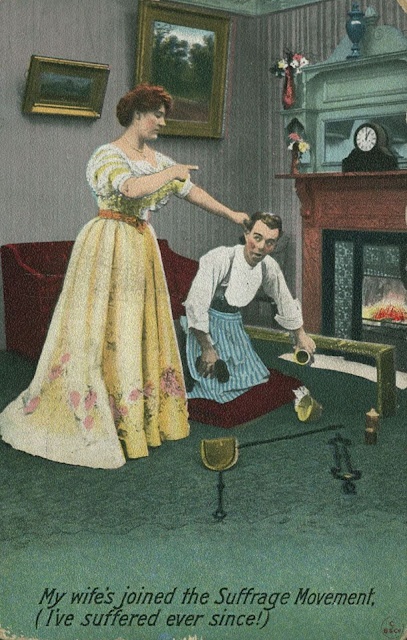 I am old enough to remember when the battle of the sexes was about cute stuff like this and mostly a great backdrop for rude jokes.

Today women are pulling the roof down on us. They’re destroying their families and workplaces. Sure there’s a lot of men that go along with it… but they tend to be guys like the one in the pic. It isn’t men offering their children to the pedos at the gay bars, or taking toddlers to progressive libraries to have stories read to them by trannies.

I read a fascinating book recently about the old witch trials that held the premise that these historical events were not about attacks on women… but about families and communities protecting themselves. Feral women start rumours, gossip, sleep around and break up families and stir rivalries and feuds… and witch burning was actually a way to get rid of them and put an end to their nonsense. In our prosperous times such a thing is unthinkable. But in those days? When people lived a lot closer to the line and a functioning family was required just to survive? Shrewery and harlotry could turn families against each other and the consequences could be downright dire.

What is it that compels women to attack their families?