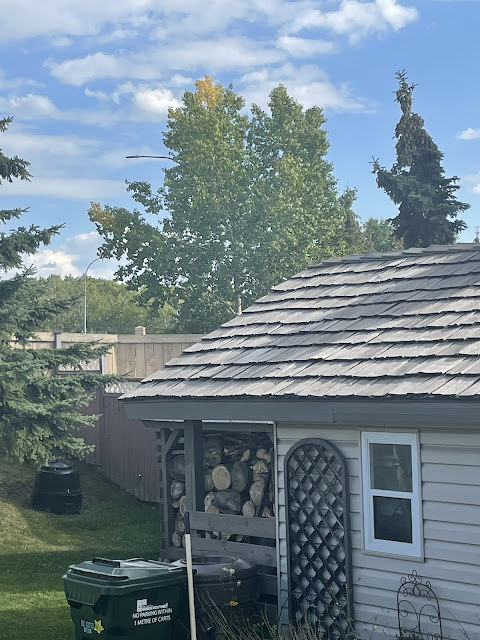 A little splotch of yellow high up on the tree. Fall is still a long way off but Stubfart Relativity kicks in. For sour old goats, time compresses. Years start to pass in the blink of an eye. There's a few yellow patches on Dawg Island too.
Out at the airfield things were hustling. The fat old guys aren't much on the ground - but get them in the air and they are sudden death in all directions. Even at this stage of life, a howling engine and flashing wings make the pulse pound a little faster. The big birds came out to play and they tore the sky up from one end of the field to the other. The shithawks that defy me with impunity were driven off in sheer panic at great big war birds and aerobats that screamed across the blue summer sky. There were a few near midair collisions today which only added to the fun and pandemonium.
Stubfarts: 1
Sea Gulls: 0
Terns, Crows, And Kingfishers: 0
One the road in I nearly broke my nose on my windshield - a bunch of baby kingfishers or whatever those little guys were - scampered out in front of me. They were so tiny and cute. They were so small I am surprised I saw them. When they grow up I will be cursing them and fighting them for air superiority I suppose.
But the snow will be back again before I know it. I better figure out how I am going to make some skis. I'll burn that bridge when I come to it. Outside the oasis of the airfield though, the heat is oppressive. Drivers get cranky on the roads and do stupid things, and the trees and plants bake in the heat and get dry.
Such are the seasons in Alberta.
Posted by Glen Filthie at 17:44