Not Bourne - It's Basic Pistolcraft 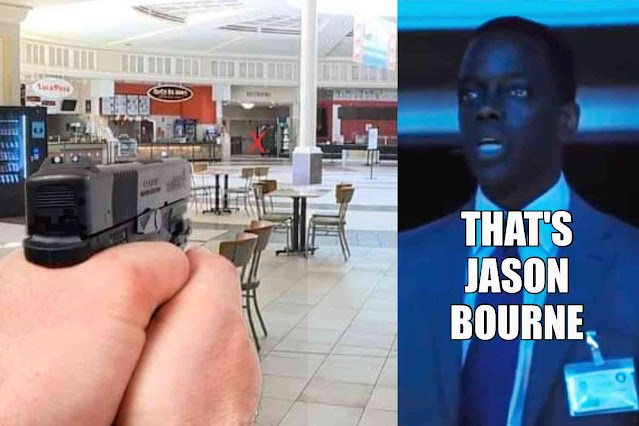 So everyone is going on about that kid that popped a failed liberal social experiMINT that was going to shoot up a food court with a sport utility rifle. Apparently, Our Hero greased the perp at about 40 yards - and everyone is going on like the kid is Wyatt Earp... or Jason Bourne.

Not to take anything away from the kid - under the circumstances, with the lead flying and people panicking - the young man showed a coolness and proficiency most veteran cops don't have. That is a condemnation of our police, more than anything else. The kid did well, and deserves the accolades he got.

However - 40 yards is not a long shot. Back when the Old Guard still were with us, guys like Bill Blankenship was dumping 12" gongs at 200 yards. THAT is exceptional shooting. A hit on a human sized target at 40 yards should be a walk in the park. If it's not - you need to put in more trigger time. And - even when you can make hits at those ranges... the practice doesn't stop. Could you do that under fire or in a crisis situation when adrenaline is dumping into your veins and the pucker factor is off the scale? You need to be able to do that on instinct.

This should also give pause to the cool kids that huffily say, "the only reason for your handgun is to fight your way back the the rifle you never should have dropped...". At close ranges, the guy with the pistol is every bit the threat that the guy with the rifle is - and more so, if he knows his stuff. Take your pistol seriously. If you ever have to face an armed adversary, you'd better take his pistol seriously too.

This latest incident was a win for everyone. Back when I was a kid, success stories like this were squelched by the press. This story is all over the place, and it drives the shitlibs up the wall to have people see that guns SAVE lives too.

You owe it to yourself to push your gun and yourself right to your limits. Get out and shoot!