I remember a 100 years ago that awful country song about some chicken headed woman is on the road with her baby-on-board, and she spins out or something - and as the car is doing 360's down the highway, and Cherlene is praying to the baby Jesus to take the wheel and save them.

Not to rag on Christians - I fancy myself as one of sorts - but that song was so damned stupid it made me want to scream. If it happened to you - would you just throw your hands up and tell God to do the driving and save ya? For me - I will keep driving until either I splatter on the guard rails or I regain control of the vehicle. But hell's bells - that is one dumb country song.

This morn was a deadly serious patrol out at Stubfart Airfield. I decided to transition from my gentle trainer plane to something a little more aggressive - a low wing, tail-dragger aerobat. 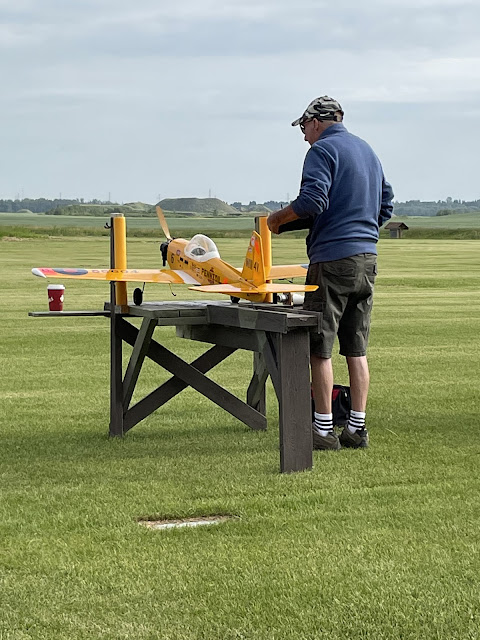 One of our junior apprentice fighter pilots is warming up on a Chipmunk
It was a little windy today but wind doesn't bother us RC
guys the way it does for real pilots.

I am not a seasoned RC pilot. I had visions of my airplane doing something stupid, and panicking and gobbling in fright as my fast little fighter plane turned into a lawn dart... my own horrifying "Jesus take the wheel" moment, I suppose. The winds picked up and the sock was straight out... but I went up anyway.

The tail dragger is an absolute sow on the ground - but in the air it rolls with a snap. It's much faster than Super Dave the trainer plane, and has to land a little faster.. This one moves. At least for me. I went up several times and and now I am running low on delicious cool green nitromethane fuel, HAR HAR HAR! I needn't have worried. I magically didn't lose my chit and have to beg God to save my little airplane. Now I have to start practicing aerobatics. 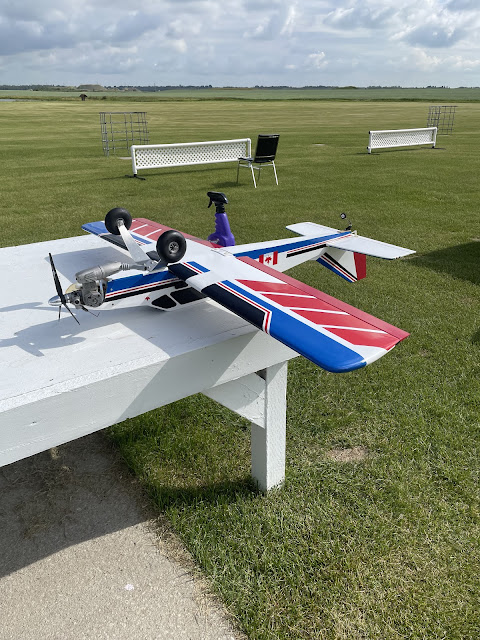 Afterwards the single-engined Twinstar was covered in bug guts,
grass clippings and nitro oil.
I had some scrubbing to do...

Everything went fine, of course. I'd put my time in on the simulator, I was comfortable with the trainer plane, and there were no catastrophic surprises. My landings were even better than the old boy's with his Chipmunk. I am by no means the new Red Baron... but I can control my airplane, and now can start delving into the complexities of pattern flying. Unless something stupid happens like a mechanical failure... I will fly "three mistakes high" as I learn and I should be alright. Good training pays off.

Which brings me round to a foolish poast I did the other day when I was beaking off  about that kid that greased an active mass murderer at the food court and put him away It appears I have to make some clarifications because sometimes I don't speak my mind well. First - I am not trying to denigrate the kid or his shooting. What he did there maybe wasn't basic pistolcraft. Maybe it would be better to call it advanced pistolcraft? Skill is relative. I forget that I am now pushing 60, my eyes and nerves and concentration are not what they were... Could I still make a 40 yard shot? I think I could, but I'd have to get serious about my training. Back when I was shooting at my best, I was in my 30's, I had memberships in three gun clubs, and I was on the range three or four times a week. I had to by a progressive Dillon reloader because I was consuming ammo faster than I could make it on a single stage press. I never really thought of myself as an advanced shooter - I was just a stubfart with a passion for a hobby. I shot better than most folks because I put in the time and effort and thought nothing of it. I read the words of experts and took them to heart. Skills are not graved in stone - put the time in to acquire them, and you will think nothing of them either.

The other half of that thing shooting incident is mindset. BP brings up the issue on this scholarly poast. Over at the Bitter Centurion JL weighs in. Both of those are good reads. I have done some reading in passing and based what I read, I think combat mindset can be taught IF it is done correctly.

A lot of guys think a 40 yard shot with a pistol is miraculous. No, it's not. You could do it too, but you would have to put the trigger time in.

Yes it can be done.
Yes, guys like you can do it.
These guys are going at it cold. Give them a couple weeks training at these distances and their scores will go up. Practice these shots, and keep your skills up - and if you find yourself in a tactical situation you will revert to your training. At least, most of us would. Combat Mindset is a complex subject and the experts don't agree on it. My knowledge of it is spotty at best. But lack of information should not deter and intrepid stubfart from having an opinion! HAR!!!
I say that you most definitely can - IF you have the commitment, the coordination and passion to do so. The Romans built the deadliest industrial combat machine in ancient history - from the peasantry. They were the best fighters of their day because they were disciplined and fought and trained as a unit. They could think and hold on the battlefield with snarling filthy barbarians right up close and in their faces with very nasty edged weapons. Their training regimen is the stuff of horror stories.
The SEALs, the DELTA's, Rangers.... the frickin Spetznaz do the same. There is nothing magical about any of those guys. They weren't born that way, they were not gifted by God with their abilities. They build their skills one at a time, they practice them, they test themselves and they can shoot bad guys all day long. TRAINED bad guys. Are you going to tell me that if you had skills like these, and were faced with a pimply, zit faced kid with a gun... that you would go weak in the knees, tell Jesus to take the gun, and gobble in fright? Or run and hide? I don't think even General Aesop would do that! I don't think these fellas in the viddeeyahs would either - but I could be wrong.
Aesop was giving me the gears over at BP's as usual and picking on my like he always does, saying I should poast up my score cards and targets. I am astonished that BP allowed such shabby treatMINT of one of his star poasters, to be honest!  I am a gun club duffer and don't shoot as much as I should... but here ya go. That's 20 rounds, 5" group off my hindfeet, all in the black at 25m. In my youth you could probly shave off an inch, maybe an inch and a half off that. If I got off my fat ass and actually practiced... I could tighten them up... but I just don't have the passion for shooting like I used to. I'm going once every couple of weeks now and when I go, I only shoot for fun. Could I make a shot on a man sized target at 40 yards. Sure. You probably could too. 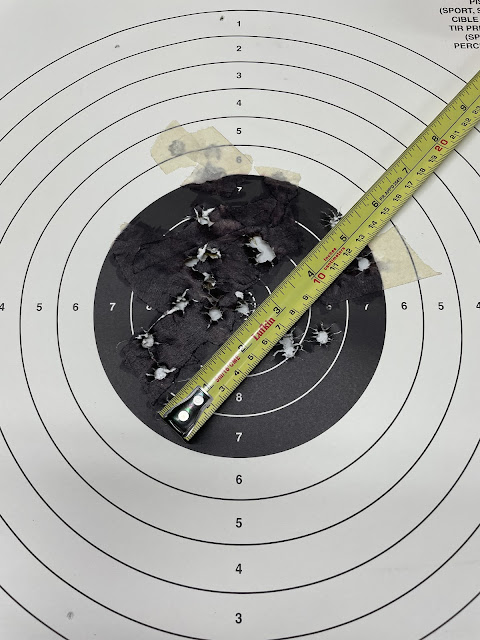 Just a practice target. Slow fire.
At forty yards the group would be likely twice as big but they'd still be mostly
on your chest.
"Now do that in a food court filled with people, and a pamper full of fright, Filthie!!! AND
a target that shoots back!!!"
Shooting on a two way rifle range is the same as shooting on a one way. The only difference is that
you have to decide: can you make the shot? If so, ya send it. If not, you find cover
and see what unfolds.
But ya almost certainly wouldn't unload in your tighty whities.
Have some bloody pride.
Ya won't find out by getting in a flame war on the innernet though. So... get out to the range and don't pracctice - TRAIN. Push yourself, if you're so inclined. Take yourself and your pistol seriously and have fun too. The best weapon you have is the one between your ears - IF it's loaded!
Cheers!
Filthie
If I gotta listen to it - so do you!
Enjoy!!!
Posted by Glen Filthie at 12:48