Back in the day when aviation was in its infancy, the guys used doped canvas stretched over a metal/wooden frame to form the shape of the aircraft. It was quite the art. As metals and materials became ever lighter and stronger, wood slowly gave way. Nowadays, only purists and traditionalists use wood and fabric. Most guys that still use fabric covering go to metal tube airframes covered by modern fabric coverings that are much superior to those used by aviators 100 years ago. They like to refer to themselves as 'rag and tube' builders. 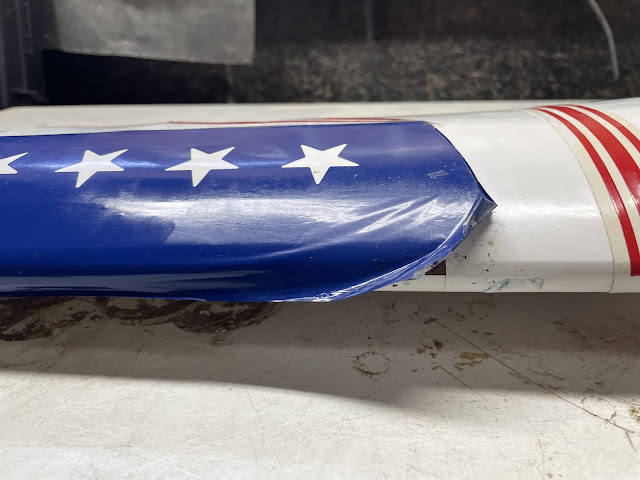 Super Dave has some unsightly cosmetic damage on the wing.
Too many hours getting soaked by hot nitro and oil exhust has taken its toll,
and his proud stars and stripes are starting to peel.
Us RC guys use a plastic-like material called 'monokote'. Ya tack down the middle with a heated iron, and slowly work your way out carefully avoiding unsightly air bubbles and wrinkles. At least... that's the theory. Covering RC planes is an artform, and it has reduced many builders to sobbing, gibbering emotional wrecks. They flat out refuse to do it and pass the job off to the guys that can do it. I should probably do the same... but... 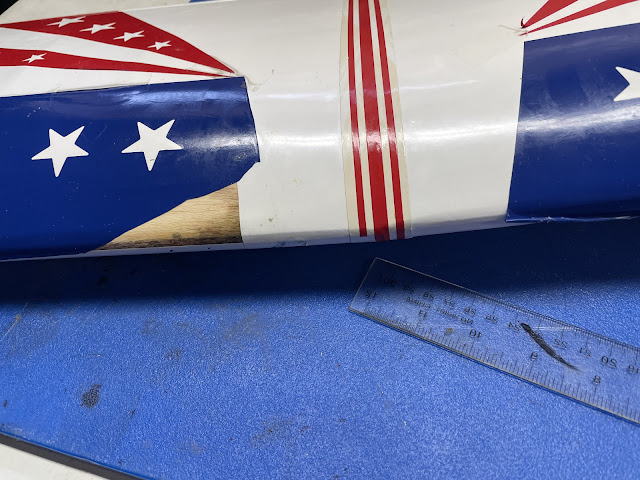 I have no idea what I am doing here. I cut away the damaged
coatings.
The balsa wood underneath is soaked in oil too. That can't be good...
My goal here is to cover the old spots and protect them from the damaging nitro fuel oils that inevitably coat the airplane. Years of this has taken its toll. Super Dave is largely semi-retired now. I will put him through the odd mild aerobatics; but mostly I just enjoy tame flights with this bird. I have a couple aerobats and am building another - and this exercise is about building skills and protecting the airplane and that's it.
To do this properly I should have bought several colours of monokote, and carefully measured and cut the fabrics to match the original colour scheme... but Dave's career is probably coming to a close. He is peeling everywhere and has many structural repairs and so forth. This is the kind of plane the average flyer rapidly outgrows. I will keep him around largely for sentimental reasons... but that's it. 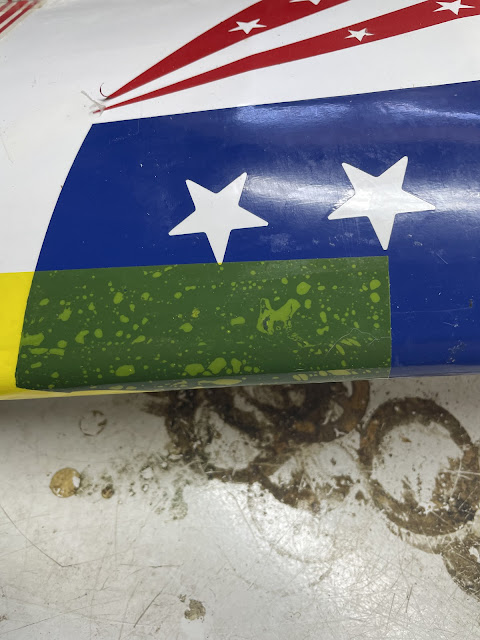 Yeeeccchhchct!!! Even for a harelipped retard, that's bad!
A urine-yellow patch?!?!?
GAH!!!
🤮
I didn't have the proper sock for the iron but I went ahead and did it anyway with some of this shytty yellow monokote, I got lots of air bubbles and wrinkles and managed to get some of them out. I had big problems holding the wing and the iron and trying to lay down the coatings... and it shows. But... it IS stuck on, and hopefully will hold up to another season of hot oil and bug guts. I can see why the guys hate doing this... but the only way to acquire skills is the hard way. The stubfarts at the airfield tell me it isn't worth the time or expense to re-cover this plane. But... I may do it anyway just to get good at it.
As long as my friend stays air-worthy... that is all that counts for now.
Posted by Glen Filthie at 02:48