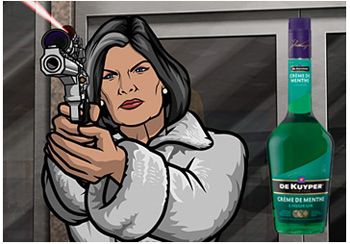 A lot of things make sense about Sterling Archer when you look at his mom. She is manipulative, deceitful, tough, forward thinking, practical…and a magnificent old bitch with a rapier like wit. Other times, she is a petulant fish wife that couldn’t find her own ass with both hands. Her son would be offended if someone were to tell him how much like his mother he actually was.
I am no turtle-necked super spy, and Mom is no alcohol swilling super snark machine… but I saw a rather rancid meme of Mallory… and thought, “That is my mom….”. And I started laughing. I had to stifle it because my wife is sleeping beside me, but I can’t help it. She thrashes in exasperation and rolls over, trying not to wake up, and I want to laugh even harder. I think I shat the bed!
😆👍
Pa Filthie is dopey and exhausted, but now he’s semi-lucid and capable of some reasoning. He’s cracking jokes at the nurses and doctors and threatening to flash them. He is having odd dreams too - he woke up convinced that Big Bro was a member of some pervert polygamy cult in BC. (That’s plausible). Mom loudly apologized to the staff for her asshole of a husband whom is actually a nice man when he’s not full of drugs and pain. Pop is in tough shape… but he’s still with us. The doctors also found a mass in his lungs they don’t like the look of… but that is a battle for another day. For now… Pop is still with us. And Mom may not kill me  with a .44 magnum. (Or vice versa…). For now. Perhaps the prayers were heard. Thank God.
And thank YOU again for your kind words and prayers. We are going to be alright, and these days… ya can’t ask for much more than that.
Posted by Glen Filthie at 03:56