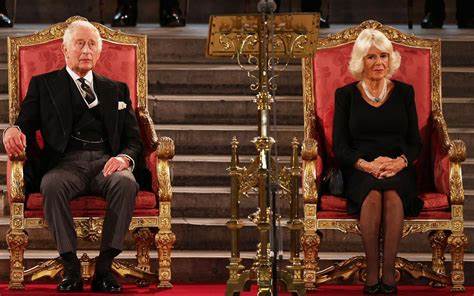 Fuck THAT.
The only good thing in this is that it isn't Lady Di on the bitch
seat! That cunned stunt is one Britain is far better off \
without! I'm sorry but there is no nice way to say it.

WTF is this? "Queen Consort"? Your Majesty - do you seriously expect me to say that with a straight face? I really wonder what planet I'm on these days what with all these senile geriatrics running around with their hysterics and histrionics.

I'm a good shit and I know ya gotta resepect your elders. I haven't shot my mother (yet) - but I could, and it would be a justifiable homo-cide too! HAR HAR HAR!!! I just laughed when Biden woke up as Adolf Hitler the other day and did a speech threatening half his people with death and damnation.

So here they are, ascending to their rightful thrones for the first time amidst pomp and ceremony! And for me - a lowly commoner from the colonies up in Canada... I can only think of the appropriate music for the occasion:

Oi. I need a foogin point...
Well I suppose there have been stupider historical precedents set by the monarchy... but... at least these ones aren't sending their country to war or executing people willy-nilly. So...? What will Chuck The Fuck do in his new official capacity? Address the issue of climate change and the environMINT? Reparations for entitled blacks whose lives matter? Will he discuss his plans with the plants in the green house?
This is all our fault ya know. These old farts should be put out to pasture. They should have gone ages ago. Good God... 'Queen Consort'? Life in Clown World continues apace. Not to pick on them - I am an non-essential old fart too. But... I wouldn't want to do a job like that at my age, never mind theirs. In my family the old ones flat out refuse to be a burden on the younger ones and it is a tradition I can respect. I woulda thunk it would be the same for everyone... but whadda I know?
Would you want to abandon retirement? For a role like that?