Of Course They Were, Schmuelly….! 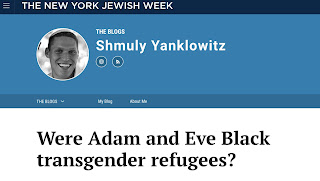 I wonder where all the anti-semitism and white supremacy is coming from these days?

Years ago I stumbled across a channel on JewToob that I thought was great at first. It was called TED-talks… and the idea of it was that the day’s shakers and movers would do little 15~20 min presentations on current events, or breaking research topics, human interest stories and what have you. The first few I saw were fascinating and I thought I was really on to something. I punched that “like” and “subscribe” button like a good little mainstream media monkey and figured I had yet another circus to entertain me.

Then one day this greasy little fella is up there. He’s obviously from (((the tribe))) of palm-rubbing happy merchants with the funny hats. And his topical lecture of the day is classical biblical mythology - specifically the tale of David and Goliath. He spent 15 minutes making a case that by all archeological evidence available… that David was a racist violent bigoted bully - and Goliath was his poor innocent victim - one of the first of a proto-religion that would later develop into a world wide industrial genocide regime. I was shocked and then moved to laughter as this rat faced little cretin wove his own narrative of this famous biblical event. At the conclusion, the muppets in the audience went nuts with adoring applause. I looked at them… and they were all clones: big, fat slags trying to look classy and sophisticated by wearing fashionable scarves and trendy clothes and make up. Kinda like the oinkers and fatties you see in Starbucks all the time. His groupies made me laugh too. I suppose if some (((internet moron))) wanted to re-write the bible… I wasn’t about to get riled about it. I gave the vid a “thumbs down” and noticed most other folks that watched the vid cast down-voats too. Whatever.

If I were to respond in kind… I might openly speculate on why - for absolutely no reason at all, Adolf Hitler might suddenly flip out and start making soap and lampshades out of totally innocent joos that were obviously pure as the driven snow?

But - thank goodness - asking such questions is now illegal in Canada. Our pink-socked prime minister, with his own harem of swankily dressed Starbucks green haired fatties and oinkers - has decreed any such questions as hateful and anti-Semitic.  HAR HAR HAR!!! I suppose ol’ Turdo and Schmuelley here can ask such questions of our Maker when they get touched by an anvil and meet Him personally in the next world.

I will not ask embarrassing questions about the holocaust, wouldn’t want to offend Schmuelley, Turdo and the usual suspects. But… what about the historical relationship between joos and Turdo’s ideological cousins - the Bolsheviks? They kilt MOAR joos than You-Know-Who… and they get a pass…? Can we ask questions about that in the spirit of seeking the truth and intellectual honesty?

And…? Eerrrrrrrrrrmmmm… why is it that the pore innocent joos have historically been driven out of every country they ever settled in…?

“For the love of gawd, Filthie!!!! Shut your pie-hole!!! You hateful Christian nationalist!!!! You ignorant superstitious Christian Talibanger!!!

Okay! Okay, already!!! Sheesh! I quietly unsubscribed from TED Talks on “Happy-Merchant-Tube”. Not long after that, I started hanging out at Blab with all the other retards and bad kids. The rude jokes alone were worth the trip. 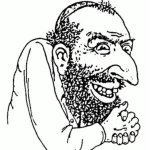