The Dual Nature Of Light

Back in high school, in chit house physics you learn about the conundrum that faced the tall foreheads as they struggled to understand light, how it behaved, and why it behaved that way. Otherwise kindly mild mannered academics experimented and almost ended up at each other’s throats over the issue. Leading egg heads were sure light travelled as particles, and their adversaries were sure that it propagated as a wave. There was much hand waving and raging about it until Albert Einstein came along with quantum theory. Guys that were at each other’s throats were suddenly stymied by the new theory - and it’s implications. Then they started to fight about that.

Anger is a lot like light, and has dual contradictory properties. In one form, it consumes the soul, it’s all there is, and consumes everything around it as well. It has its own event horizon where those outside can see nothing inside, and those inside can never see out. Or get out.

From another relative vantage point… it’s nothing, just a singularity, a point in space where nothing works as it should. With enough distance you can see it all quite clearly, and the maelstroms that drive it and sustain it are nothing… just abstract perception with no real meaning in the real world.

This weekend Mom finally let me in to see my dad. He was still delirious from the meds and anaesthetics but was capable of sporadic stretches of lucidness. He’s in tough shape but he’s still with us. Mom is being awful and doesn’t want me involved at all with the family crisis. But my Big Bro is perfect so the two of them will make the best of it, and my input is not required. She’s trying to exclude me from everything to be a **** … and I just don’t care anymore. Stuff like this used to make me seethe… but now?

My place in the family is that of the dog’s servant. I am allowed to go to their house and let him out and pick up after him and take him for a walk. 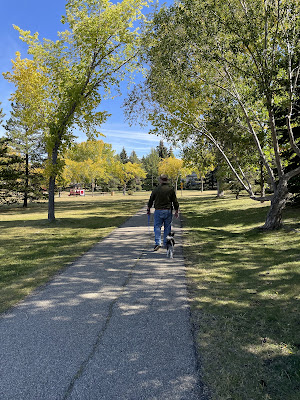 It’s enough.
Mom told me that if they can’t care for Sam… he will go to live with Big Bro.  She decided that to be a **** too, and again, it might have set me off in another time and place but not now. Unlike me, Big Bro has not had good luck with dawgs and this little bugger is special. Everyone deserves at least one dog like this in their lives and I have been blessed with several.
I strongly suspect I will be cut out of the vast Filthie fortune when the king passes and I don’t care about that anymore either. Big Bro can have the dawg, my 25.7 cents share of the estate, because I don’t need it. Any of it. I live a life of opulence, grandeur and splendour in my basement! I will be the world’s first cellar-dwelling  geriatric “incel”, HAR HAR HAR!
😆👍
For now it’s good to be a dutiful son, seldom seen and not heard. For whatever reason, I am finally free of the anger and bitterness that used to make the slights, issues and taunts hurt. It is an incredibly profound experience.