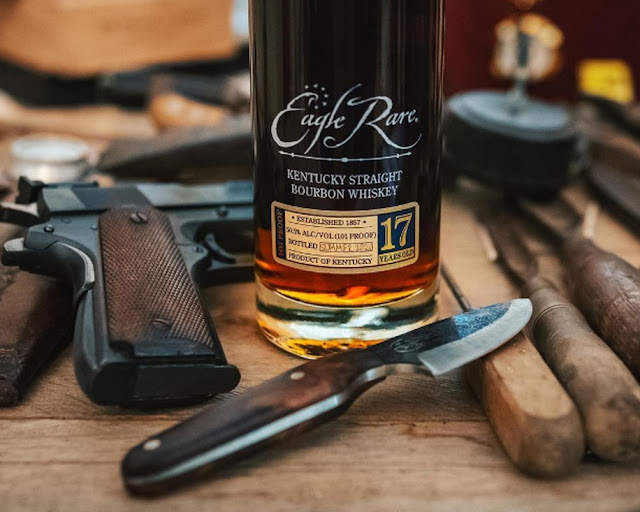 Hmmmmmm. What have we here? Looks like a no-frills .45 carrying what may or may not be a precision adjustable rear sight? We can look at it closer once we’ve had a few drinks, I suppose.

That little skinner knife up front… veeeeeery interesting. This person is either a well versed sportsman schooled in the ways of the field and stream… or he’s some big city soy posing as one. That is simply a superb little skinner, and would be just the ticket once the deer is on the ground and it’s time to go to work! A business like blade, with a generous handle and a finger groove for added control and precision…? A skinner doesn’t get any better than that! But! If someone is carrying that as an EDC blade…? You’re prolly looking at a piker, or a Californian, or a poseur! Skinners are for skinning; their utility is extremely limited beyond that.

Eagle Rare bourbon? I am out of my area of expertise. I was a scotch drunkard connoisseur and most of that was with single malts. If memory serves (and sometimes it does) I have had Four Roses, Makers Mark, Elijah Craig, Blanton’s… and they were all good, but I really remember liking Blanton’s the best.  Buffalo Trace was spectacular. This is a 17 year old? That could be good or bad… but if someone else is pouring… I suppose that automatically makes it good, right?

My drinking days are largely over… but I wouldn’t mind trying a wee dram just for fun.